Amidst complaints that Amazin' Avenue has been too Francoeur-centric lately, I decided to do the only thing I could do: write exhaustively about Jeff Francoeur. Actually, I've been tracking Francoeur's "progress" for a while now, since, sadly, he's one of the most interesting reasons to watch the Mets these days. While many here have fought to fight the notion that the Mets won the Church-trade, this article makes no comparisons, as that would be unfair to Jeff.

Despite your overall opinion of Francoeur as a player, one undeniable fact is that he's played better since coming to the Mets. He has a .334 wOBA with the Mets, a far cry from his horrid .278 clip with the Braves. Fangraphs shows the difference in RAR to be just 4.5, mostly due to his positive UZR fielding rating before the trade, and negative rating since. Considering, however, that a season of UZR has the statistical significance of a third of a season of batting statistics, and that Francoeur is a historically good fielder (7.3 UZR/150), the encouraging offensive results outweigh the purported poor fielding.

Generally, there are two ways to improve in baseball: fix the things you're bad at or get better at the things you are good at. Over the course of his career, Jeff Francoeur's relative offensive success has been determined by his ability to crush balls in his wheelhouse and buoy his OBP with BABIP. Frenchy has terrible plate discipline. Since joining the Mets, Francoeur's percentage of swings on pitches outside the zone, his primary failing, has dropped 2.5% from 35.5% to 33.3%. While that's better than no improvement, it's not significant enough to suggest a change. He would still crack the top-10 worst marks in the league. He has, however, improved upon his career 76.4% contact rate with 81.9% (2009 Braves) and 84.3% (2009 Mets). That improvement is significant, and is a result of both more contact on pitches in the strike zone and much more contact (+6%) on pitches outside the zone. If your going to swing at everything, hit some of it, I suppose. Still, his 66% O-Contact is middle-of-the-pack and Francoeur would be better off taking many more such pitches.

Assuming he could maintain all of his current production levels with the Mets (I'm not making this bet), he would post a .292 batting average, according to Carty's component batting average calculator:

Brings back memories of his 2007 season...but raises a whole new set of questions. Namely: can Frenchman keep up his suddenly decent HR/FB%? Considering Francoeur never had any plate discipline, the true source of his offensive decline seems to be the steady drop in his HR/FB% from year to year. From 2005 to 2008: 17.1%, 15.3%, 9.8%, 6.5%. During his time with the Braves this season, he was on pace for a really bad 4.7%. Since joining the Mets, his HR/FB sits at a 12.2%, a number similar to his 2006 and 2007 seasons. Here's a breakdown of his ten homers this season using data from Hittracker online:

The average distance of his home runs since joining the Mets is lower, which would probably suggest, if anything, that he may have been a bit unlucky pre-all-star break. Interestingly, the elevation angle of his dingers, the angle at which the ball departs from the bat relative to the ground, has been on-average greater. While this difference could easily be explained away as a tiny sample size quirk, Francoeur's ability to get more lift on his flyballs would definitely bode well for a sustainably improved HR/FB%.

One possible source of this improved trajectory could be the reported change in mechanics Francoeur has made since joining the Mets:

Sheffield instructed Francoeur to keep his top hand firm as he approaches the ball, and Johnson focused on Francoeur keeping his bottom hand on the correct path through the strike zone, so the bat can remain in the zone as long as possible.

Johnson also noticed that the occasionally fidgety Francoeur was rushing his swing.

Since Francoeur had been tardy during the loading phase of his swing, he had to overcompensate by making his top hand dominate the action of his cuts. So Johnson told him to "just go up there comfortably, relaxed, take a nice easy stride and get that front foot down before the ball is out of the pitcher's hand."

Although I am normally suspicious of such claims, as easy explanations always follow good results, I decided to compare film on two swings he took this season, his homerun versus Edinson Volquez in April and his homerun against Ubaldo Jiminez in July.

Those of you running Netscape on Windows 3.1 should proceed with caution because there will be slow-mo .gifs ahead.

Francoeur begins his swing pretty late, and it takes him several frames to plant his foot. He uses his bat-speed to swat at the ball and kind of jams it, causing it to barely clear the Great American Ballpark fence (and Willy Taveras' head). Notice how his swing begins with an open stance and ends in the position you would expect a Jedi to begin a lightsaber duel.

Now the shot off the young Rockies' ace:

Note first here that he begins his stance more closed, as you can read the back of his jersey. Francoeur also seems to be leaning in quite a bit more. Hojo's advice must have gotten through, as he plants his foot a frame earlier, allowing the bat to take a much less forced path to the ball. Overall this swing seems to involve a lot less unnecessary motion and better coverage of the zone.

Here's a side-by-side breakdown of the two clips: 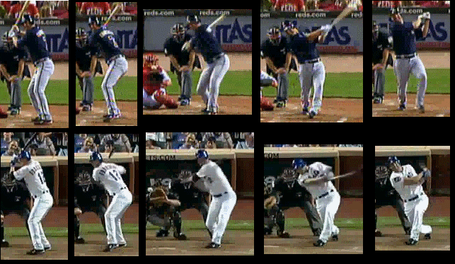 Not much to add, expect notice the difference in swing progression in two middle panels. It may look there that the difference could be the location of an outside v. inside pitch, but the final locations of each pitch were actually much closer together.

This new swing may explain his sudden dramatic success against sliders and changeups, his two previously most troublesome pitches, according to Fangraphs linear-weighted Pitch Values. Theoretically, more time to see the ball after committing to his swing, coupled with a cleaner path to the ball, would particularly help with two pitches that require more careful judgment. Indeed only one of his homers as a Mets so far has been hit off a fastball:

Those four pitches, however, are pretty unspectacular according to the movement chart to the left, and all in his "wheelhouse" as shown on the right. So perhaps his success against non-fastball pitches is more a product of inferior opponents. Still, those four pitches are the type he needs to crush every time to be successful, and are probably four pitches he missed too often these past two years with the Braves.

Like most things, whether any of these improvements are long-term can best be revealed through time. Given the likelihood Francoeur will make in excess of two-million dollars through arbitration this offseason, however, the Mets do not have much more time to decide the fate of Francoeur. Given his platoon split (career lefty masher) , youth, and defense, I would be inclined to keep him. A young player like Francoeur that has the upside as a starter and the bizarre skills of a quad-A player seems to be a better use of a big-market teams 2MM dollars than Cory Sullivan and Rob Mackowiak. Due to self-imposed budgetary strain, howver, the Mets may have to non-tender him. Which would be a shame, since although I still think it's a hot streak, Frenchy seems to be improving. While he still exhibits the terrible approach that has prevented him from taking the next step in his offensive game, he may be reverting back to his perfectly serviceable 2007 levels. Next step: walking.