Bobby Parnell is a known commodity to Met fans at this point. Rated the #5 prospect in the Mets farm system by Baseball America, the fireballing reliever started off his 2009 campaign, his first in the bigs, on a hot streak, quickly overtaking JJ Putz, Sean Green, and some guy named Socks to be the #2 arm in the Mets' new, revised, world beating bullpen. He was highly regarded to the point where the Mets objected to trading him straight up for Nick Johnson, a talented (yet injury prone) everyday 1st baseman who when healthy, has put up All-Star numbers. Though Parnell took a considerable step back after his initial dominance, his presence in the bullpen has been one of the few stalwarts of this season, and many of us considered him a shoo in for a bullpen role next year as well. That is, until the injury situation got so bad that Parnell was called in to spot start. In his first start, Parnell was more than unspectacular, only lasting 2 and a third innings in a losing effort. Many of us were not expect much more. However, imagine our surprise when the next time through the rotation, Parnell goes 6 innings, throwing 86 pitches, 61 for strikes. This would be encouraging in and of itself, but Bobby "Lazy Sunday" Parnell also struck out 7 Giants, walked none, and only allowed 3 hits, none for extra bases. Why is this? Some analysis after the jump.

All PitchFX data is from Brooks Baseball. First, let's look at Parnell's release points, first on his wild start: 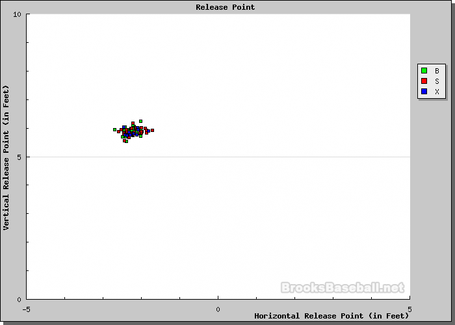 That's kinda all over the place. Is there an adjustment made in his most recent start? 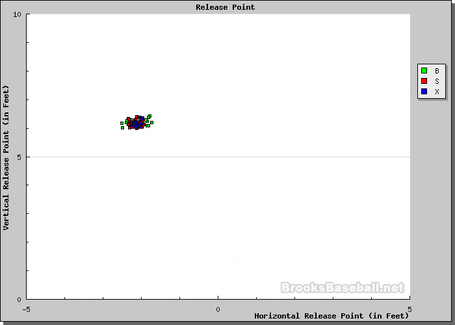 Much more consistent delivery, and also, somewhat surprisingly, somewhat higher up. Even a slight adjustment towards a more traditional, overhand delivery could certainly be a factor in Bobby "Founder of the Irish Parliamentary Party" Parnell's increased control and stamina.

Next, let's look at some break charts, detailing where the ball broke to horizontally and vertically, again, with the first start first: 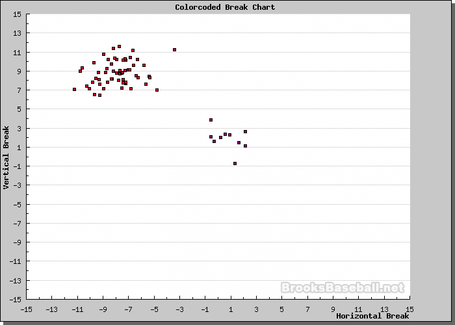 Pretty easy to see that these pitches are quite different. The fastball and the slider break very differently, making it perhaps easier for the batter to understand which pitches to hit and which ones to lay off, perhaps contributing to Bobby "Sarah Palin's Successor" Parnell's bases on balls problem in his first outing. The second game? 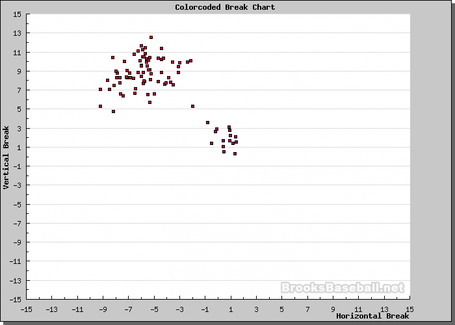 That's interesting. These pitches are somewhat more similar when breaking. Does this affect the batter's ability to decipher which pitches to hit and which ones to take? Considering I'm a relative PitchFX n00b compared to some others on this site, I'll try not to bullshit too much on that one. Regardless, I'd hypothesize that this could also be a contributing factor.

Finally, let's take a look-see at some velocity charts.

Discount the two-seamer and the changeup, both of which register along with the fastball on all of the charts. Bobby "Blue-Eyed Soul" Parnell's fastball averaged 94.69 mph, topping out at just over 98 mph. That's a good 9 mph off from his slider, which was decidedly ineffective in this start, registering as a strike only 40% of the time. And now, the second start:

The fastball was actually slower in this start, but the slider was faster. Most importantly, however, was Parnell's ability to locate and throw his slider for strikes. 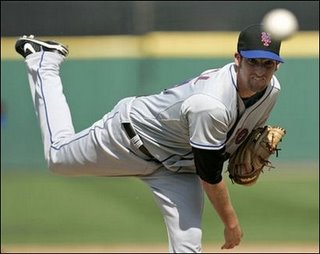 2 starts does not a career make, but I'm beginning to see some signs that Bobby "The Father of Modern Ventriloquism" Parnell could be at least a competent 4th or 5th starter if he continues to improve. It might be difficult with his limited repertoire, but his stuff seems good enough that it may not matter.