Being ten-plus games out in mid-August is bad enough, but having to suffer through games like tonight's is borderline criminal, with scant reason to even tune in at all. The Pirates recently sold off almost every recognizable name on their big league roster, and their short-term outlook is moribund to say the least, but they do have some young ballplayers who might reasonably contribute to the next decent team in Pittsburgh. These Mets don't even have that on most days. Only Daniel Murphy and Jeff Francoeur have any real chance to be better in a year or two than they are now, and I can't in good conscience recommend either of those bets. Those two and Luis Castillo are the only regulars who are even likely to be with the team next year. So I ask: what are we rooting for anymore?

Francoeur, Fernando Tatis, and Brian Schneider saw 8, 11, and 9 pitches tonight, respectively. That's 28 pitches in twelve at-bats. Is it any surprise that their respective on-base percentages are .296, .306 and .280? At .320, Anderson Hernandez had the fourth-best on-base percentage in the starting lineup. Fourth!

Livan Hernandez was pretty awful again, slogging through 5.1 innings while allowing six runs, eleven hits (five for extra bases), and one intentional walk. He did strike out a batter, but it was opposing pitcher Joe Martinez. I'd say Hernandez's days are numbered, but I would've thought that three weeks ago, too, and we're still here suffering through lousy start after lousy start.

Rosters expand in two weeks, but there aren't too many exciting options at Triple-A Buffalo. Nick Evans should be up with the big club already, playing every day in an outfield corner, first base, wherever. Ike Davis, maybe? Reese Havens? I suspect we may actually see Ruben Tejada, especially now that Alex Cora is gone for the season.

The Braves come to town tomorrow as Oliver Perez takes on Derek Lowe. 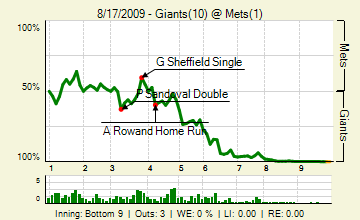