Bobby Parnell, well, he didn't quite have "it" tonight. For the unindoctrinated, "it" is something that only baseball people like Steve Phillips and Fran Healy can understand, and I'm told that it can prevent things like allowing nine hits and nine runs in three innings. Last start Parnell had "it". Tonight, less so. It's just one start, which is probably what we should have told ourselves after last time.

Parnell was spelled by Nelson Figueroa, who allowed two runs on three hits in two innings. Figgy turned it over to Tim Redding, who coughed up another three runs on four hits in three innings. Sean Green, yep, one run on two hits in one inning.

Only two players had positive WPA contributions, and both were negligible (.3% for Will "The Spill" Valdez; .2% for Omir ".300 OBP" Santos). 38,602 miserable humps showed up to watch this debacle, and I pity them and everyone that looks like them.

Johan Santana and Kenshin Kawakami face off tomorrow at 7:10pm, and we can only hope they inspire something better than this pitiful recap. 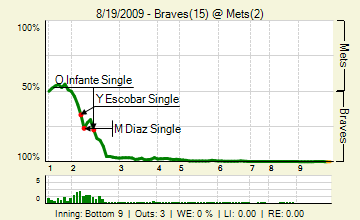