Original post: I'll have a more complete recap later. For now, just enjoy this picture of Jeff Francoeur and the fact that his OBP hit .300 tonight. Congratulations to the entire Francoeur family and Delta Airlines. You earned this one, big guy.

Expanded recap: This game didn't exactly have the urgency of late-season games against the Phillies that the past two seasons have, as the Phillies have a sizeable lead in the NL East and the Mets can barely see third place from where they currently reside. Nevertheless, these games are always a little bit more exciting because beating the Phillies (and the Braves) still feels great even when the Mets have little else to play for most days.

Though is walk and strikeout rates have both been terrific, Cole Hamels is having a tough year overall, giving up a lot of hits, homeruns and runs, and dropped to 7-8 after last night's loss to the Mets. True to form, he struck out six and walked none in five innings, but allowed a homerun and ten hits that led to four earned runs.

On the Mets' side, Mike Pelfrey turned in a solid start, allowing just two runs over six innings while striking out five (Hamels twice) and walking two. His sinker wasn't particularly effective, as nine of his 14 in-play outs came on flyballs.

The hit-by-pitch played an important role in the game, leading two a run apiece for each team. In the bottom of the second, Hamels hit Pelfrey with a pitch that forced Omir Santos to second. With two outs, Angel Pagan's single to center drove in Pelfrey and gave the Mets a 2-1 lead. In the top of the sixth, Pelfrey hit Jayson Werth to push Ryan Howard to second, who scored two batters later on a Pedro Feliz single to center.

If you were wondering whether Gary Sheffield's recent run-in with the Mets' front office over a 2010 contract would lead to intransigence (or worse) on the field, look no further than his utter indifference to being ejected in the seventh inning. After an admittedly shoddy strike-three call by Rob Drake in the seventh inning, Sheffield threw his bat in disgust and was quickly tossed by Drake. Clearly miffed by the call, Sheffield appeared entirely unemotional at begin given rest of the night off.

Hamels, against Mets
seems to buckle to pressure
How to describe it? 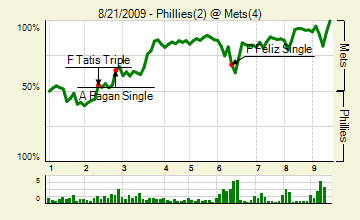