Schwing And A Misch: Phillies 4, Mets 1

Share All sharing options for: Schwing And A Misch: Phillies 4, Mets 1 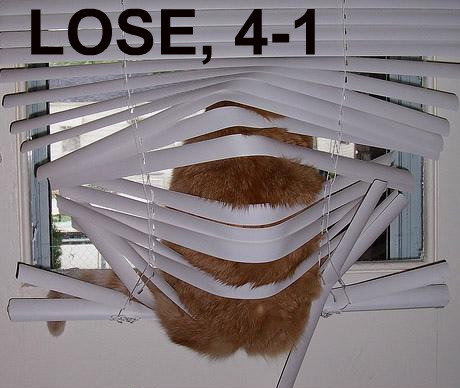 Tim Redding started a game the Mets ultimately lost, and for once the loss had nothing to do with him. Redding surprised everyone in attendance by stymiying the Phillies for five innings, allowing just a Chase Utley single in the third to sully his mini no-hit bid. He also walked three and struck out four, recording most of his outs in the air and inducing swinging strikes on 7.4% of his pitches. Since we're on the topic of pitches, Redding was only allowed to throw 81 of them tonight, presumably because he's been a swing man for a while now and Jerry Manuel likely didn't want to push him too far. This seems like a stretch to me, as I would venture to guess that Redding could have come out for at least another inning. Instead, he was relieved by Pat Misch, who is terrible and isn't afraid to show it. Misch allowed a two-run homerun to Utley in the sixth to turn a 1-0 lead into a 2-1 deficit.

Misch was only allowed to embarrass himself and his family for a third of an inning, and he was promptly (though not promptly enough, apparently) relieved by Sean Green, who allowed a pair of doubles to Raul Ibanez and Pedro Feliz, the cumulative result of which was the Phillies' third run of the game. Four relievers combined to pitch the final three innings for the Mets, allowing one run on three hits and four walks while striking out just one.

The Mets managed to do very little of consequence against J.A. Happ, who allowed just one run on eight hits in seven innings. Ryan Madsen and Brad Lidge each whiffed two batters in an inning of relief, with Lidge lowering his ERA to 7.05. Omir Santos was the offensive star of the game for the Mets, knocking in their only run with a second inning single and drawing an unintentional walk to bring his on-base percentage up to .306. Jeff Francoeur went 1-for-4 but kept his OBP a hair above .300. Still, Santos widened his lead so Francoeur has to pull the stone of shame again tonight. Angel Pagan and Luis Castillo picked up two hits apiece while Gary Sheffield continued his downward spiral into uselessness by going 0-for-4. Wilson Valdez went 0-for-3 to the astonishment of no one.

Oliver Perez takes on Pedro Martinez at 1:10pm on Sunday. 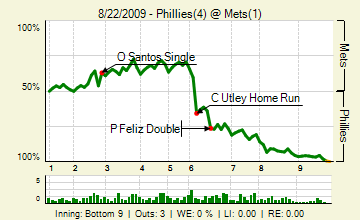 Nice job by painiac; his effort in the game thread embiggens us all.