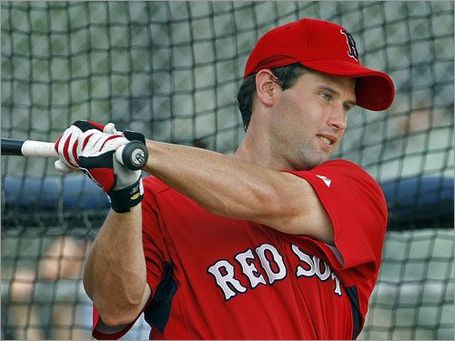 So we may as well get to know this supposed PTBNL for Wags as it looks like hes going to be auditioning for the role of "Ike's Placeholder".

Chris Carter is a 6", 225lb L-L 1B/OF. Carter was drafted in the 17th round of the 2004 draft by Arizona. Even before college Carter was a star hitter who made Baseball America's Preseason All American team as a high school senior in '01. As a college freshman Carter burst onto the scene posting a 1.034 OPS and earning Stanford's 'Freshman of the Year' honors. However, the following season he fell victim to a bit of a sophomore slump due to a shoulder injury. He bounced back in his final college season thanks to a nearly 1:1 K/BB which has become a trademark of his game. Though he didn't quite live up to his 'middle of the order' billing at Stanford he certainly produced well as a high on-base guy with good pop and solid plate discipline throughout his college career.

Carter was devastating in his debut against lo-A pitchers batting .336 and mashing 15 hrs. In 2005, his first full season, he posted a .296/.377/.531 line, hitting 31 bombs between hi-A and AA. The most impressive stat was his 77/65 K/BB when compared with the hr total. Scouts gushed over Carter's plus bat speed and impressive contact ability for a power guy as well as the natural loft in his stroke and his strong plate discipline. Following the '05 season prospect guru John Sickels wrote:

"Carter has a very good, even excellent, bat. He Has power, hits for average, controls the strike zone, and duplicated his success against Dougle-A pitching...I am very confident in his ability to hit."

"Carter's tremendous bat speed and plus-plus power make him a potential middle-of-the-order threat...he's capable of hitting 500-foot bombs. He doesn't need to make perfect contact to hit the ball out, nor does he need to pull the ball."

(Here is some footage of his swing where coincidentally enough he is knocking in the first RBI in Citi Field history. A good omen maybe?)

Carter continued his crushing ways in 2006 in AAA where he smacked 19 more bombs, batting .301 with a .395 OBP and actually struck out less than he walked (69/78). Despite continued offensive success in '07, Carter was dealt to the Red Sox in a 3-way deal in mid-August. However, this came at Carter's own request due to the presence of Conor Jackson in AZ.

The Sox opened Carter in AAA Pawtucket to begin 2008 and he had a customary .300/.356/.515 line with 24 hrs, though his K/BB did worsen. This season Carter is doing more of the same in Pawtucket batting .280 with 14 bombs and only 59 k's. He has had a couple cups of coffee with Boston but other than leading the club in hitting in the spring (.359 with six home runs, four doubles and 10 RBI in 64 at-bats) Carter has not yet seen any real major league action.

However, the reason Boston is so willing to deal him, the same reason why you won't see him on any Red Sox top prospects lists, is his defense. Carter's power bat is and always has been his only useable tool. As a defender, he is bad. He is a first baseman by trade but suffers from hard hands and poor footwork. His lack of speed also cuts into his range. Recently the Sox have moved him to the OF but his lack of speed and arm strength make that a stretch. Often labeled a future DH, Carter brings a bat to the party and thats about it.

There are definitely some things to like about Carter: His bat has shined at virtually every level he has played, and his plate discipline and contact ability are for real. John Sickels wrote that if he were judged on his bat alone Carter may grade out as a B level prospect (which is high praise). What's more, as a hard swinging lefty he has always managed to put up even splits against both lefties and righties. And for what its worth, Carter is known as a very intense "grinder" who gives it his all despite a lack of physical gifts. And like many Stanford products Carter is very intelligent and utilizes that intelligence well, studying pitchers and making adjustments when necessary.

However, he definitely has some warts: First off the kid is a few weeks short of 27 which is quite old in prospect years. And more importantly his lack of a true position is worrisome since we obviously cannot utilize the DH which scouts have suggested for him as early as college. His seeming inability to man a decent first base kind of neutralizes that bat. What's worse, many (including BP's Kevin Goldstein) see Carter as a quad-A slugger type.

Overall: This guy's game should seem familiar because he is a very similar player to one Daniel Murphy. Lefty, no glove, good plate discipline in the minors, even his swing (same as above) looks very similar to Murph's, though with more loft and a little more open. He's even got the Murphy's trademark intensity for god's sake! But what we have to hope is that the power Carter has flashed throughout his career is for real and can hold up against our cavernous home ballpark. Basically we're hoping for a Carlos Pena scenario: A power-hitting, high OBP lefty first baseman bounces around to a few teams before establishing himself as a middle of the order hitter. However, all in all I'd say that while Carter isn't a bad player to take a chance on and I'm somewhat optimistic with him, his downside probably makes him less valuable than the 2 first round draft picks we sent along with Wagner (assuming the second PTBNL is a nobody, which might not be true).

(Here is a pretty interesting Q&A with Carter from SoxProspects.com, conducted only 3 weeks ago)

*As an interesting aside, to me this move indicates that the Mets will be filling the vacant first base spot from within for at least the next 1-2 years until Ike is ready to grab hold of it. Meaning some combo of Murphy, Evans, Tatis and now Chris Carter. If you throw enough crap against the wall, right? So I suppose I can stop dreaming about Adrian Gonzalez...