Towing the worst lineup I've seen in at least a few days, the Mets pounded out ten runs and seventeen hits in pubishing the Marlins 10-3 to salvage the final game of their three-game series. Every starter had at least two hits -- yes, even Wilson Valdez -- as the Mets proved that old axiom that even the sun shines on a dog's ass some days.

What's more, Tim Redding turned in his second-straight respectable start, keeping the Marlins to three runs on five hits over 6.2 innings. Though three runs will often be too many for the Mets' offense to overcome, I guess this was Redding's lucky day.

I'll be at the Friday afternoon game at Wrigley, weather permitting, and I'll likely be treated to a repeat of this star-studded lineup with the added bonus of Pat Misch's first start of the season. Ted Lilly will be on the mound for the Cubs; start time is 2:20pm EDT. 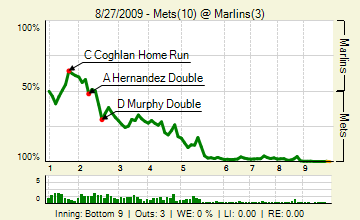