Mike Pelfrey May Have Found His Out-Pitch

Share All sharing options for: Mike Pelfrey May Have Found His Out-Pitch

Exactly one month ago, after Mike Pelfrey threw a career-high 22 sliders against the Brewers, I asked if Pelfrey's sudden fondness was a result of a tangible improvement. I said at the time of his results:

These results hardly suggest a dominating "outpitch," but the 7 foul balls support the possibility that Pelfrey's slider is becoming more different than his fastball, keeping hitters off balance.

During that start, Brewers batters put his slider in play six times (three line drives) and whiffed on it just once. Yesterday against he Diamondbacks, Pelfrey threw the bendy pitch 26 times, 16 for strikes. The D-Backs put it in play twice, both groundouts. They swung-and-missed on it seven times. Pelfrey matched his season-high six strikeouts, with five strike threes being whiffs at the slider. It seemed as if Pelfrey's slider had indeed come around.

While it's only one start against not the best offense in the world, two of said strikeouts were versus Justin Upton, who's already one of the best hitters in the National League at 21. While Pelfrey gets by with his two-seamer generating a good amount of groundballs, the lack of a true out-pitch has always seemed to limit his ceiling, and at one point even threatened to keep him out of the majors. A good breaking ball would be nothing short of a revelation for Pelfrey, giving him a chance to develop into a true front-line starter. Imagine 50+% GB with a K/9 in the 6-7 range and very few homeruns.

Still, Gary and Ron noted during the broadcast yesterday that, despite Pelfrey's 6 strikeouts, his inability to put hitters away when ahead in the count suggested he still lacked a true out-pitch. In the first at bat of the game, Pelfrey got ahead 0-2 on a fastball and slider, before throwing a slider for ball three. Drew's strikeout looking at a fastball that at bat was the lone non-slider K for Pelf. In his 10-pitch duel with Justin Upton, the slider accounted for called strike one, two balls, and a swinging strike three. Only once did the slider really seem to be the problem when Pelrey couldn't put a hitter away (Ball 2 and 3 on Romero's double). Still, not one slider was a called ball four and later in the game I found myself calling for him to throw it deeper in the count.

So those are the results, but is Pelfrey actually throwing a better pitch? First, the movement of last night's pitches: 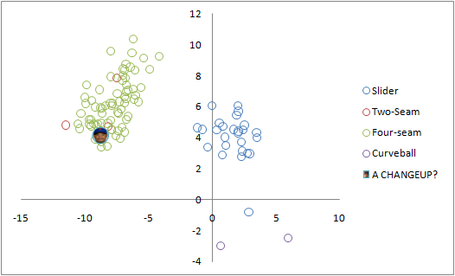 Pitchfx only classified three pitches as two-seamers, which probably means he wasn't getting as big a differential in movement between his two-fastballs, not that he only threw three. Remember Ron saying that Pelfrey gripped his two-seamer on the inside, causing it to break more into hitters? Apparently it wasn't doing enough of that yesterday. First, however, let's look at just the slider. For reference I've included the average slider, according to BtB, in red: 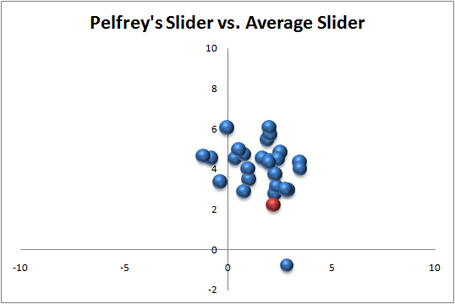 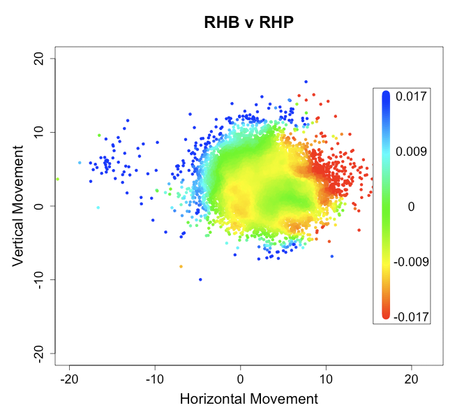 What this graph means basically is the closer to red on the color spectrum the better the slider, as that indicates a lower run value, i.e. a lower contribution to the other team's ability to score runs. Clearly, the more tailing away from the batter, the better, so Pelfrey's below-average horizontal movement may not be ideal.

Fangraphs also measures run value for each pitch, which is a popular measure for how good a pitch is. Last year, Pelfrey's run value on his slider was -8.1 runs, which, unlike on the graph above, is bad because fangraphs reverses the sign to make positive numbers good. This year, however, Pelfrey's slider has been worth 0.8 runs. His slider has also doubled its horizontal movement, going from .9 to 1.8 inches, affirming Allen's conclusion about the more tail from the right-handed batter, the better. The horizontal movement on the five strikeout sliders from yesterday were: 2.778, 4.531, 4.416, 3.723, and 4.00, all clearly on the far end of the above graph and well right of the average slider.

Using linear weights from this article, I also tried to calculate the run-value of Pelfrey's slider yesterday. These are said linear weights:

My method wasn't the way that fangraphs calculates  it, as they account for the game situation, and I only accounted for the count, but the end result was 1.816 runs which is obviously well above 0.8, and a good reinforcement of how good the pitch was yesterday.

The conclusion here seems to be a positive one. Pelfrey's slider has demonstrably more horizontal break than before, especially on some big pitches yesterday. Going back to Ron's comment in the booth, however, about Pelfrey's two-seamer breaking away from the batter, I have one more theory about Pelf. If the best sliders tail away from the hitter, wouldn't it help for Pelfrey's fastball to tail into the hitter, potentially exaggerating the break of the slider in the hitter's mind? For reference look at one more graph from yesterday's start: 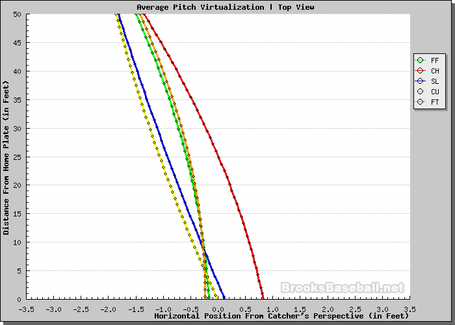 Notice how the orange line (two-seam) has a distinct break in and the blue line (slider) has a distinct break out from all the other pitches? Carlos Marmol has one the nastiest sliders in the game, with 4.9 inches of average horizontal break, 3 more than Pelfrey. When you consider, however, that Pelfrey's two-seamer breaks 2.3 inches more away  from the batter than Marmol's four-seamer, the difference may seem minimal to the batter who's looking for the two-seamer.

As anecdotal evidence for this theory, consider Pelfrey's average two-seam fastball breaks -9.3 inches , while his four-seamer breaks -7.9. The pitches immediately preceding his five strikeout sliders earlier were, in terms of horizontal movement, -10.565 , -5.793, 2.416 (two straight swinging strike sliders were preceded by a -7 fourseam), -6.613, -7.918. Obviously, it doesn't exactly support my theory, but it's something to watch out for.

Overall, Pelfrey's progress with the slider is extremely encouraging and his perceived "step back" seems more to do with bad fielding and sophomore durability issues, not a true step back in development.