The Good: Bobby Parnell had an 8-to-4 grounder-to-fly ratio and induced 10 swinging strikes on 109 pitches (9.2%). Jeff Francoeur, Fernando Tatis, Brian Schneider and Anderson Hernandez collected two hits apiece, with Frenchy and Schneid-dog knocking in a pair of runs each.

The Bad: Everything else, really. Despite generally keeping the ball on the ground and getting plenty of swings-and-misses, Parnell was basically awful, allowing eight runs on nine hits and two walks in 4.2 innings. That makes three straight terrible starts for Parnell over which he has coughed up 22 runs on 22 hits in 12.2 innings. It can't be doing much for his confidence to keep going out there to get shelled, but the Mets have a lot of games left in the season and few attractive options to start many of those games, so I suspect Parnell will keep heading out there every fifth game to see if he can't figure something out.

The rudiments of promise are there: I dig the groundballs, and I dig the swinging strikes. Those are building blocks that could eventually buttress a successful pitcher. Whether he'll get there or not is a different question, but I vote for keeping him in the rotation until or unless something better comes along. Parnell could still be a meaningful contributor to next year's team, though he has plenty to work on between now and then. Sticking with him as a starter wouldn't preclude a move back to the bullpen at some point, so let's see if anything sticks over the next month.

The A's and Padres both won so the Mets picked up a game on each. They're now in eighth place overall. They conclude their series with the Cubs on Sunday at 2:20pm as Nelson Figueroa takes on Carlos Zambrano. 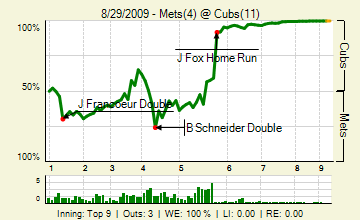