Share All sharing options for: Best Win Of The Season: Cardinals 12, Mets 7

Wow. What a win! This game is a perfect example of why I love baseball so much. Joel Pineiro, who has been so good for most of this season, didn't have anything resembling his best stuff tonight and the Mets made him pay. They didn't hit any out of the park (Jo-Po is a severe groundball pitcher, you know), but they bunched hits together in the third and fifth innings, plating three and four runs, respectively.

The Cardinals managed to keep things close, scoring single runs in the first (Ryan Ludwick homerun), fifth (Matt Holliday RBI single) and eighth (Pujols homerun), and hung a two-spot on Johan Santana in the fourth inning thanks to RBI hits by Ludwick and Rick Ankiel (he used to be a pitcher, you know).

Still, things were looking pretty grim as the Mets carried a 7-5 lead into the ninth and had Francisco Rodriguez (or, K-Rod as I like to call him) out there to close the game. The Cards were ready for him, as Ankiel led off the inning with a double and a rejuventaed Julio Lugo doubled him home. Colby Rasmus struck out swinging, but Captain Clutch (no offense to Mr. Jeter) Skip Schumaker singled home Lugo to tie the game. The Redbirds loaded the bases following a Pujols walk and Holliday fielder's choice, but Ludwick popped out to end the inning (drats!).

Kyle "The King" McClellan held the Mets in check in the bottom of the ninth, and it was off to extra innings we went!

The Mets brought out some dude named Socks to start the tenth, and he was really, really good, getting Yadier "Effing" Molina to ground out leading off. Then for whatever reason, Jerry Manuel took the super awesome Socks guy out of the game and brought in Pedro Feliciano, who I think used to pitch in Japan. An Ankiel infield single, Lugo single and Rasmus walk loaded the bases for Mark DeRosa (he's from Joysey!), but Manuel (the Mets' manager) must be a fan of Tony La Russa because he made another pitching change, bringing in Sean Green (the Jewish guy?) to face D-Rose. I guess DeRosa must've made some quip about Green's yarmulka or something because Green wound up and hit him with the first pitch. Seemed like a pretty stupid thing to do, what with the bases loaded and whatnot, but I guess he was just sick and tired of all of the yarmulka jokes.

So the Cards were up 8-7 and Pujols came to the plate with the bases still loaded. Poo fell behind 0-2 very quickly, but he plays the game the right way and sent an 0-2 pitch sailing over the left-centerfield fence for a grand slomboli and gave the Redthings a comfortable 12-7 cushion. That was about it for the Mets, who had already used their best pinch hitter (Socks) as a reliever and couldn't muster more than a couple of baserunners against Ryan Franklin in the bottom of the tenth.

All in all a huge win for the Redblobs, who pull into a virtual (reality!) tie with the Cubs for first place in the central. Kyle Lohse takes on Jon-a-finesse tomorrow at 12:10pm. Be there! 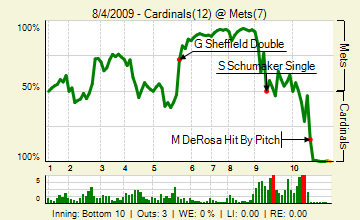