What To Expect From Josh Thole

Share All sharing options for: What To Expect From Josh Thole 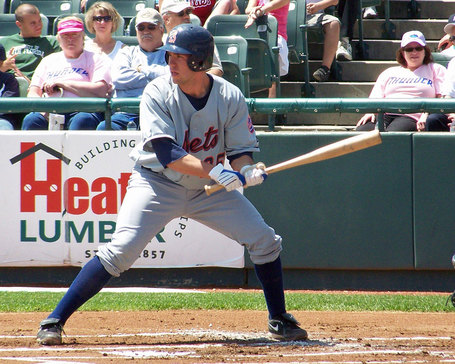 Josh Thole has been called up to join the Mets as rosters expanded today to accommodate up to forty players. We've been on the Thole bandwagon for a long time, and lately there have been concerns that he might not even be added to the 40-man roster in time to be protected from this Winter's Rule 5 Draft. Those fears were finally assuaged when Thole was added to the big league roster for tonight's game with the Rockies. Sam and Mark will eventually get to their full prospect report on Thole, so I'm just going to take a quick look at his performance this season to see what we might expect out of him.

In brief, Josh Thole is a 23-year-old catcher who bats lefty and throws righty. He is hitting .329/.396/.424 this season in 439 plate appearances with Double-A Binghamton. Jerry Manuel has hinted that Thole might be limited to playing against righties, which of course doesn't make any sense because:

Thole has shown little power in the minors but a very good eye at the plate. What power he has displayed has mostly come against righties, with an ISO of .201 compared to just .062 against lefties. That, I suppose, is the main argument for platooning him (despite no platoon split in his on-base percentage), but I'd still argue for playing him as much as possible since he's going to be on the team anyway.

To dig a little deeper into Thole's offensive profile, he doesn't even seem to be displaying the rudiments of power. While his doubles rate is so-so, he hits very few line drives (12.3% in 2009), so it may just be that his batting stance and approach at the plate are more conducive to getting on base than mashing the ball. His BABIP is .348 this year, which isn't at all supported by his line drive rate, so there's some concern that his batting average might tank given worse luck. If his batting average drops off even a little bit his now-mediocre slugging will be even less impressive.

For a quickie idea of what his Double-A batting line might look like in the majors, we can use MinorLeagueSplits.com's minor league equivalent adjustment, which pegs Thole as a .254/.307/.322 hitter, which is pretty awful and not far off from what I expected. I can't imagine we'll be able to draw any meaningful conclusions from the 50 or so plate appearances he's likely to get in September, but I've been a fan of his for a while now and it's nice to see him get a bit of recognition from the organization. Barring some unforeseen (and likely unsustainable) offensive explosion this month I think it's safe to say he'll be back in the minors in 2010. Nevertheless, with very little to justify watching Mets games these days, Thole gives us another reason to tune in. When he's playing, that is.