Another Game, Another Loss: Phillies 4, Mets 2

Share All sharing options for: Another Game, Another Loss: Phillies 4, Mets 2

Carlos Beltran got the night off again, presumably for weather-related reasons (ed. note: he's afraid of the rain). In a striking display of solidarity in support of their terrified centerfielder, the rest of the Mets' offense took the night off, too. I guess that's not entirely fair; they managed nine hits including seven off Cole Hamels, but they plated just one run in the first eight innings. In the ninth, Omir Santos led off with a double and Jeremy Reed's pinch-hit single sent Santos to third. Cory Sullivan then grounded into a rally-killing double play, chasing home Santos with the second run but also providing the Phillies with two important outs. Angel Pagan grounded out to second to end the game.

The loss was the Mets' fourth in a row and seventh in their last ten and it moved them to the precipice of mathematical playoff elimination. They were unofficially eliminated a couple of months ago, but we do like our statistical numbers here and those tell us it's almost officially time to move on.

The Mets' latest stretch of unwatchable futility has vaulted them over the A's, Padres, and Reds into seventh place overall, just a half-game behind sixth-place Arizona and a game-and-a-half behind fifth-place Cleveland. The real dregs of the league are at least another few games behind that, but a top-five overall pick would be a silver lining in this lost season. 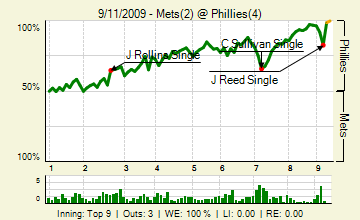