Share All sharing options for: (C)Loser By Committee: Mets 10, Phillies 9 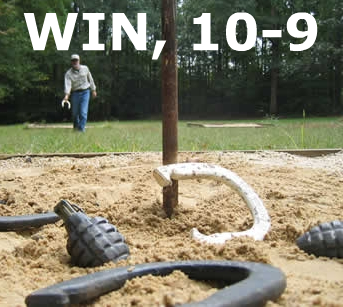 There were two distinct sides of this game for the Mets. The first -- let's call it the "bad" side -- was Mike Pelfrey's performance, which was simply terrible. He allowed eight runs on ten hits in six innings, surrendering homeruns to Pedro Feliz, Chase Utley and Raul Ibanez. Citizen's Bank Park is a tough place to pitch, but I'd expect a groundball pitcher to have a bit more luck there than those who are flyball-prone. Pelfrey did record nine of fifteen in-play outs on the ground, but he coughed up an early Mets lead and dug them a pretty deep hole to crawl out of.

Which brings us to the other side of the game -- the "good" side, which was the Mets' offense in general and their offensive resiliency in particular. Pelfrey left the Mets with an 8-4 deficit when he departed after his sixth inning of work, and the game was 9-5 in favor of the Phillies after the two teams traded single runs in the seventh. Then David Wright took over the game and reminded everyone that he's David "!@#$ing" Wright. With one out and Fernando Tatis on second, Wright strode to the plate and deposited Brett Myers's 1-2 offering over the centerfield wall to pull the Mets to within 9-7. Three of the next four batters singled, the last of which came off the bat of Daniel Murphy, who drove in Carlos Beltran with the Mets' eighth run of the game.

In the bottom of the eighth, Sean Green retired pinch-hitter Matt Stairs on a popup but then walked Jimmy Rollins and Shane Victorino on eight straight balls. Pedro Feliciano relieved Green, and proceeded to walk Chase Utley on five pitches to load the bases. No worries, though, as Feliciano struck out Ryan Howard swinging on a 2-2 pitch to end the threat.

The top of the ninth began predictably enough, with Jeremy Reed grounding out to first and Luis Castillo bouncing out to shortstop. Tatis kept the Mets alive with a single to left, which set the stage for Wright, who disappointed Philadelphia fans and threw another wrench into the Phillies' muddled closer situation by launching "closer" Ryan Madsen's first pitch into the leftfield stands to give the Mets' a 10-9 lead.

The Mets' own "closer" did his job, retiring the Phillies in order in the bottom of the ninth, capping it with a strikeout of Feliz.

As was pointed out in the pre-recap comments on this thread, I've generally been rooting for a high draft pick nowadays but this one was awfully sweet. The Phillies should still coast into the playoffs while the Mets head home early, but for at least one day it was refreshing to watch a Mets game and actually enjoy it.

The Mets and Phillies play two on Sunday, with John Maine returning against Kyle Kendrick at 1:05pm and Tim Redding facing Pedro Martinez in the nitecap at 8:05pm. 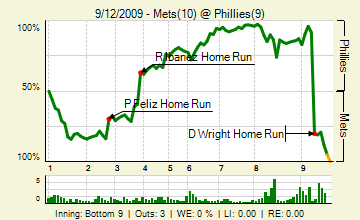