This was John Maine's first big league start in more than three months and he looked, well, okay. His fastball was in the low nineties, which is a few ticks lower than it was early in the season. He only stuck it out for three innings, but he was on a tight pitch count for obvious reasons. He threw all of his pitches -- the fastball, slider, and changeup -- with varying degrees of effectiveness and control. He allowed just one run on two hits and a walk in his three innings, tossing 57 pitches (61.4% for strikes) along the way. The results, while decent, take a back seat to the process, which was encouraging. Maine was back on the mound and looked okay; his arm didn't become detached from his body at any point, so that's a good sign.

There were three bright spots for the Mets offensively. Josh Thole went 4-for-4 and is eight for his first eighteen as a big leaguer. Jeff Francoeur had three hits and got his on-base percentage up to .306, practically dwarfing Omir Santos's .295. Finally, Anderson Hernandez hit his first homerun since re-joining the Mets and his third career homerun overall.

For the Phillies, their carousel of closer craptaculance continued, as Brad Lidge -- for at least one game -- took the mantle of ineptitude away from Ryan Madsen and did everything in his power to give it right back. Lidge allowed three hits and two runs in the ninth, allowing the Mets to close a 5-2 gap to 5-4 before finally "saving" the game by striking out Angel Pagan to end things. 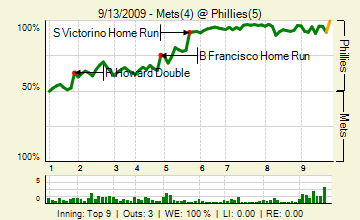 Nice job by firejerrynow; his effort in the game thread embiggens us all.