Not that it really matters much to point fingers, but without a doubt we can hang this loss on the offense. Tim Redding held the Phillies to just one run on three hits and a couple of walks, finishing six innings and pitching about as well as could be expected agaist a very good team in a very tough ballpark. Sean Green and Pedro Feliciano each contributed a hitless inning of relief.

Unfortunately for the Mets, Pedro Martinez looked like the Pedro of 2005-ish, allowing six hits and two walks while striking out seven in eight innings. Phillies manager Charlie Manuel left Martinez out there for 130 pitches, and even tried to take him out with two outs in the eighth but was Grady Littled back to the dugout. This one worked out better than Little's rebuff, as Daniel Murphy was thrown out trying to advance to third on a ball in the dirt, ending the Mets' eighth inning threat.

Ryan Madsen allowed just one baserunner -- a one out single to Brian Schneider -- in shutting the Mets down in the ninth. The Phillies took three of the four games in the series, though the Mets remain in seventh place overall in next year's draft standings. The teams ahead of them are world class losers, so the Mets will really have to pull together over the season's final three weeks if they want to out-suck the Diamondbacks and Orioles of the baseball world.

Monday is an off day as the Mets travel south to take on the Braves beginning Tuesday. Pat Misch will take on Atlanta rookie Tommy Hanson.

Vintage performace
Sees only heartless abstain
from vote for Pedro 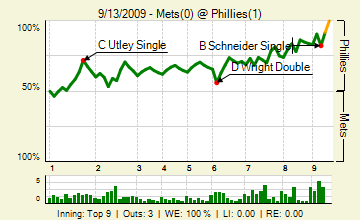