Yesterday's Braves-Cardinals game looked like a promising pitcher's duel: Javier Vazquez vs. Chris Carpenter, 2 of the best pitchers in baseball this season.  Carpenter failed to hold up his end of the bargain, getting shelled to the tune of 9 hits and 7 runs over 6 innings in the Braves' 9-2 win, but Vazquez did not disappoint:

All 8 of the strikeouts came on swinging strikes, including 2 against Albert Pujols.  4 of the hits came in the 9th inning.  This is about as dominating a game as you will see, against a potent lineup. A glance at the strike zone plot for the game demonstrates Vazquez's approach vs. the righthanded heavy heart of the Cards lineup (Pujols, Matt Holliday, Mark DeRosa, Ryan Ludwick): 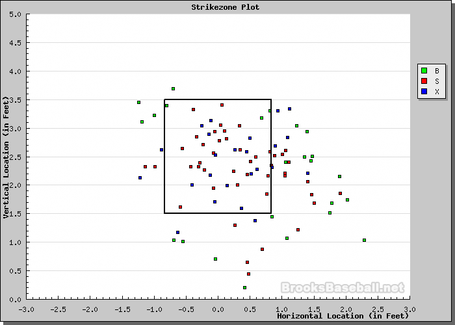 He painted the outside corner and most pitches were low and away.  Couple that location with a repertoire including a 92 mph fastball and one of the filthiest curveballs around and we're looking at a ~6 WAR pitcher.  Vazquez has been pitching great for years, but it's taken a switch back to the NL, a fair ballpark and reasonable luck to yield some ERA and W-L results. (Note: he did go 15-8 with a 3.74 ERA in 2007, but his defense independent stats have generally outperformed his ERA)

Does this really pertain to the Mets in any way?  Not really, except that Omar Minaya didn't seriously pursue the very available Vazquez this past offseason.  Ozzie Guillen basically ran him out of town for not being clutch or some other nonsense.  The Braves stepped in and acquired him for what amounts to a B prospect, hard hitting catcher Tyler Flowers.  Vazquez is still underappreciated in the mainstream but has been a sabermetric darling for some time now.  He's the anti-Ollie Perez: a pitcher with great peripherals who hasn't look as good as he is because of factors outside his control.