Jeff Francoeur Lives In The Now

Share All sharing options for: Jeff Francoeur Lives In The Now

When projecting the future performance of the Mets, no one gives me fits like Jeff Francoeur. While some people deny it, players follow career trends, things regress, and variability plays a big role in both how players and teams perform. Statistical analysis of baseball seemingly revolves around the central question of "what is player X's true talent level?" This science often involves looking at trends in data and assigning certain results as "skill" and others (often hastily) as "luck." There's significant grey area as the means of measuring what's on the field fall short. What's a linedrive? Is that a soft liner or a flyball? A low liner or a hard groundball?

It seems no player dabbles more in the grey than Jeff Francoeur. The nature of his offensive game (no walks, decent contact rate) makes the difference between a good season and bad season 2 more fluky home runs and 6 more bloop hits. Folks talk about luck in the context of balls-in-play, because there's so many factors that affect a batter's BABIP. People get caught up in one way of calculating BABIP and heated debates ensue about what a players "true talent" is. Is Jeff Francoeur's true talent his .308 career BABIP? I doubt it looking at this: 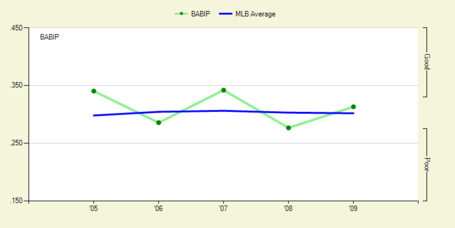 Now check out his trend in overall offensive production: 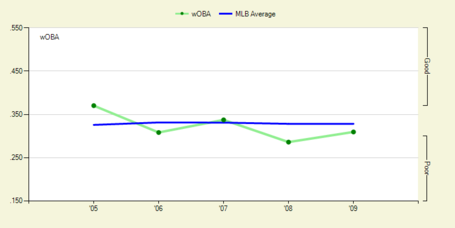 Last season, four of Francoeur's eleven homeruns were "just enough" according to Hit Tracker, meaning the ball cleared the fence by less than 10 vertical feet. That's ~30 feet between a horrible .239/.294/.359 season and an unspeakable .232/.288/.332 line. That could probably be said for other players too, but David Wright hit 23 fewer homeruns this year and struckout at an alarming rate, but managed to maintain very good production because he walks and consistently hits for high average.

Francoeur's defense works in a similar way. His best defensive season according to UZR was 2007 when he was an outstanding 17.1 runs above average due to a +16.5 run arm. The next season he was -4.7 because his arm wasn't nearly as productive and his range was horrible. So far with the Mets, Francoeur is something like a ridiculous 11 runs below average according to UZR which I would contend is more noise than anything, not representative of Francoeur's true talent. But what is? One would think displaying a great throwing arm requires the right situation (men advancing or not advancing on base) and is thus not as a repeatable a skill as tracking down every fly ball nearby. Offense and defense both considered, the difference between 3 WAR and -1 WAR season from Francoeur seems laughably small.

I've enjoyed that uncertainty watching Francoeur this season. He's played pretty well, despite nearly a season and half of being unbelievable terrible. With Frenchy, every hit and catch seems more important in a weird sort of way. Homeruns are monumental occasions. I'm also a sucker for personalities. I love to watch players smash coolers. Who doesn't? I also think there's a southern bias here.

But that's not a good reason to commit to him. I don't mind the Mets offering him arbitration, given a low figure, then cutting him when they get a better player. Or maybe keeping him as a platoon/bench guy. Betting next season on this guy, however, is not a good idea. I find it funny (and typical) that Mets fans are tripping over themselves to anoint Francoeur the RFer of the future because of one hot steak considering: A. his whole career is a series of elongated hot and cold streaks and B. he's the most uncertain commodity in baseball. You would think after 3 straight dissappointing season caused by injuries and relief pitcher explosions (the kind of players you expect to be this volitale), Mets fans would be clamoring for the sure thing. Nope, we want Jeff Francoeur, the human coin-flip, because he smashes water coolers and high-fives your hand off.

I wrote about the things Francoeur was doing differently and the same since he arrived with the Mets earlier, and I do believe he's played well since getting here. I don't think he's been "lucky" as a hitter and I don't want to make a judgment on his defense yet. The problem is: will that Francoeur show up next year? Don't answer that, you have no idea. The best well can do is project his performance using one of the many systems out there. Without knowing, I'm sure they'll call for another below average offensive year, with the upside of average.

And that's the problem. The upside for Francoeur is just league-average rightfield bat and maybe good defense. The downside is unspeakably bad and very probable. It's nearly impossible to argue these facts with some Mets fans because they can't forget their emotional attachment to the guy, step back, and realize his production can be replicated and surpassed for far less money and with far less downside if the Mets were just to go another direction. For me, Francoeur is a fascinating development of this lost season, but totally frivolous to any smart, long-term plan.

If a three-year extension of any kind is seriously on the table, the Wilpons might as well just throw their money in the air and hope it floats over to Matt Holliday.

Any Francoeur Avenue jokes will be met with a 24-hour ban.