The good news: Daniel Murphy hit his eleventh homerun of the season, inching closer to John Stearns, John Milner, and Steve Henderson of the 1977 Mets, who each hit twelve homeruns that season, the lowest team-leading mark in franchise history. So, yay for that.

The bad news: Pat Misch was terrible again, but that can't really come as a surprise to anyone who has either watched Misch this season or for that matter has watched Misch ever. Misch faced twelve batters in all, retiring four and allowing the other eight to score. It was the fifth time in franchise history that a starting pitcher allowed at least that many runs while recording four outs or fewer.

7/4/1989 - Bob Ojeda allowed eight runs on six hits in two-thirds of an inning against Mike Scott and the Astros. One of the two outs to his credit was a strikeout of Scott. Houston racked up five singles, a double, two walks, and a hit-by-pitch to drive Ojeda from the game. Kevin Tapani came on in relief and balked in Billy Hatcher, who was on third when Ojeda departed. The Astros would go on to win 10-3.

9/17/1997 - Bobby Jones allowed eight runs -- four earned -- on three hits and four walks against the Braves. Jones failed to retire a single batter and even tossed in a throwing error for good measure. Atlanta won the game 10-2; a Butch Huskey solo shot was the only highlight for the Mets.

7/19/1988 - Ron Darling coughed up nine runs -- five earned -- on five hits and three walks, two homeruns, and a wild pitch in two-thirds of an inning. Howard Johnson got things started with a throwing error and it all fell apart from there. The Mets lost the game 11-2.

Can we at last say
That mediocre Misch ain't
Glavine or Moyer? 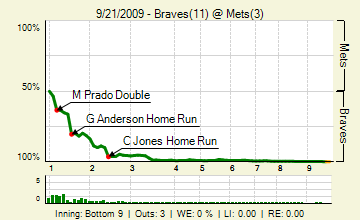