In Praise Of Sean Green

Share All sharing options for: In Praise Of Sean Green

On the surface, Sean Green has not had a very good season. An ERA just south of 5, initially wearing the same number as Aaron Heilman and several high profile late game meltdowns will create such a perception. However, as Sam pointed out earlier, things are not what they seem. Here is a look at Green's numbers this year compared to 2008, when he was a ~1 WAR pitcher and a valuable piece of the Mariners bullpen:

The seasons are nearly identical, except for a slightly higher groundball rate and doubled home run rate in 2009. It appears he was somewhat lucky as far as surrendering the long ball in 2008 (6.1% HR/FB %) and unlucky in 2009 (12.8% HR/FB%), demonstrated by the similar xFIPs.

An ongoing concern for Green is his struggle against lefthanded hitters. For his career, lefties have knocked him around at a poor but not terrible .273/.398/.422 clip. This season, they have hit .232/.372./.424, a similar line which highlights his main issue vs. lefties: walks. He's a borderline ROOGY, but if used properly can be effective as a non-specialist. He can navigate an inning vs. mostly righties with a lefty batter mixed in, preferably not a Chase Utley or Adam Dunn type. A look at the lefty batters who have homered off Green this year shows that maybe he hasn't been set up for success (Adrian Gonzalez, Nate McLouth, Ben Zobrist).

An average of Fangraphs and Statcorner WAR says he has been worth about .5 WAR in 2009, and going forward it looks closer to .7-.8 WAR over a full season. Relief pitcher valuation is an inexact science, but this is perfectly acceptable from a pitcher making $471K this season who doesn't figure to earn much of a raise next year. A bullpen role for Green means one less roster spot that Omar Minaya might fill with John Grabow or Brandon Lyon for 3 years, $10 million.

I'll leave you with a batter's view of Green's release point earlier this season compared to where it's been recently. Analysis of this will come at another time: 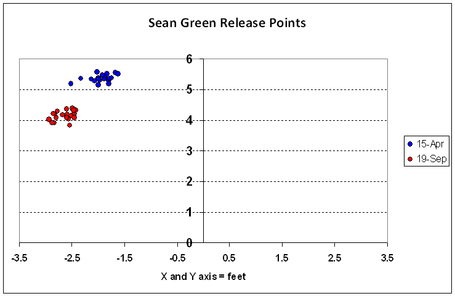