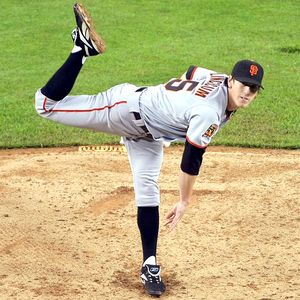 The Giants were happy enough with 10th overall pick in 2006. via assets.espn.go.com

There's been a lot of talk among Mets fans on the internet about our 2010 draft pick.  According to the standings in reverse, if the season were to end today, The Mets would have the 6th overall pick.  But it hasn't ended yet and the 5th overall pick is within grasp.  Should we really be excited to lose more games so that we can have a better pick or is this notion purely tongue-in-cheek?  After all, one commenter asks, "is there much of a difference in talent between 5 and 6?"

How much of a difference does a single position in the draft order actually make?  I seek to answer this question quantitatively using WAR.

Logically, and obviously, it is better to have an earlier pick.  Your organization has the choice among the best available player based on how it evaluates talent and how much money it wants to spend.  My hypothesis is that the difference in talent must be significant, even by a single degree in the draft order.  The disparity among signing bonuses may be some indication that the potential for performance is different.

I decided to compare the career WAR (thus far) of players drafted in the 1st rounds between 1997 and 2006.  I have looked specifically at the dataset from overall pick #1 through #10, chiefly because that is the realm that the Mets will be drafting next year but mostly because it is very time consuming to analyze deeper in the draft.  I did want, however, a 10 year span in recent history.  I stopped at 2006 because the players drafted since then have not had adequate time to be evaluated or, in most cases, reach the majors at all.  All of the draft history comes from the Wikipedia articles on each year's draft.  Then, I looked up each drafted player in FanGraphs and charted that player's career WAR to date in the major leagues.

Rather than post all of the data, here is some interesting information:

So what can we learn from this?  A few things are interesting about it.

Now let's look at it in slightly broader terms:

There are clearly some limitations to this study.  The sample size is still pretty small, for one.  But the mere fact that you need a large sample size to identify statistically significant trends shows that the difference between adjacent picks may be very minute.

So what's the upshot?  Yes, draft order does matter.  It makes a clear difference if your pick is #2 versus #8, for example.  However, I was wrong, the gap lessens considerably as the picks get closer to each other to the point that it probably doesn't matter if you have the 5th or the 6th pick.  The data is cloudy at the microscopic level.  In fact, if you were to follow the data as gospel, you'd believe it's best to have the #2 pick rather than the first overall.  The sample size problems are enough to confirm your intuition for now.  Take the higher pick, it can't hurt, but there's no need to get crazy about tiny differences in the reverse standings.