Share All sharing options for: Pat Misch Is Our Savior?: Mets 8, Rockies 3 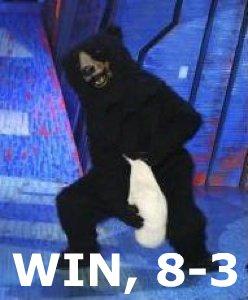 All aboard the Pat Misch bandwagon! Two starts, two solid outings. Misch grinded his way through seven innings against the Rockies, allowing just two runs on four hits and two walks. Both runs and half of the hits came on solo homeruns by Chris Ianetta and Ian Stewart in the seventh inning. Apart from that, Misch dominated a decent Rockies lineup in a tough place to pitch. He only struck out three, though his swinging strike rate of 7.4% wasn't terrible. Let's not kid ourselves, though. Stuff-wise, Misch is a fringe major leaguer, though his appearance on the mound smacks a bit of Tom Glavine; he looks quite smooth and effortless out there. Two starts don't make a successful pitcher, and Misch figures to get knocked around sooner rather than later, but he's young-ish and has a working arm so he'll keep getting starts until he begins to eff up royally.

The big news of the day was that it officially marked the beginning of the Josh Thole Era. The Mets' young catcher went 2-for-5 with a double and a stolen base. He also saw 22 pitches in five trips to the plate, so whatever nerves he might've had didn't lead to any obvious jumpiness at the plate. Unfortunately, given the Mets' love affair with Omir Santos we probably won't see Thole again for another week.

Overall, the Mets' offense exploded for eight runs and 16 hits in one game, with Angel Pagan and Dark Helmet picking up three hits apiece and Wright knocking in three runs. Daniel Murphy hit his eight homerun of the year in the ninth inning, a two-run blast off of Joe Beimel. Anderson Hernandez reached base three times; Wilson Valdez twice. Jeff Francoeur drew an unintentional walk. It was a big day, indeed.

The Mets head home for a three-game series with the Cubs beginning Friday. Bobby Parnell takes on Carlos Zambrano. 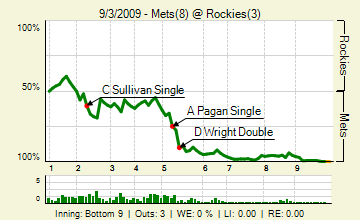