Share All sharing options for: Let's Get Defensive: The "Plan" For 2010

With the announcement that no major changes would be made to Citi Field's dimensions in 2010, Jerry Manuel decried the Mets were going to make a team built around "pitching, speed, defense." Omar Minaya has been beating that drum (while not necessarily building that team) for years. Metsblog called for a more specific version of this basic outline (emphasis of everything except Whitey Herzog his):

…instead, the Mets should be more specific… i’d like to see them put together a two– or three-year plan to develop, sign and trade for the best infield defense on the planet, have pitchers who get ground-balls on command, and an offense modeled after Whitey Herzog’s Cardinals…

Addressing the content of the quote, focusing on groundball pitchers is the opposite of building a team to suit Citi Field. Yes, groundballs are generally better than flyballs because they become outs more often, and are less likely to become extra-base hits, but focusing resources to convert your pitching staff to groundball pitchers is more appropriate for a team like the Rockies, not the Mets. Besides, the Mets are already heavily invested in flyball pitchers Johan Santana and Oliver Perez and infield butcher Luis Castillo. To build a team defensively suited for Citi Field, outfield defense should come first.

First, however, realize that "speed" offenses are a stupid concept. Speed can be important. Over the course of a season, however, the best baserunners in baseball, i.e. Ichiro, Carl Crawford, Reyes, contribute at most +10 runs a season. That's roughly the difference between a .350 and .335 wOBA starter, a few extra homeruns, a better walk rate, just one win. Stop talking about the Rays and other teams of the like as "speed" offenses. The Rays are a good because of the AL homerun leader Carlos Pena and sluggers Ben Zobrist and Evan Longoria. Take away those three and see how they fare with Carl Crawford and BJ Upton stealing home every game.

Secondly, the Mets defense this year has been terrible, the worst in the league according to Ultimate Zone Rating. Before the season, I jokingly made the Mets continental map of Citi Field based on their fielding prowess: 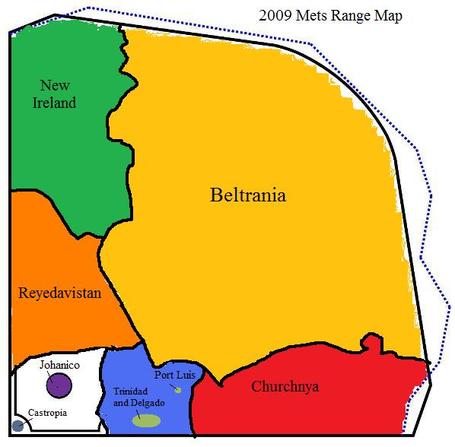 Now, faced with continental drift and global warming, the map looks more like this: 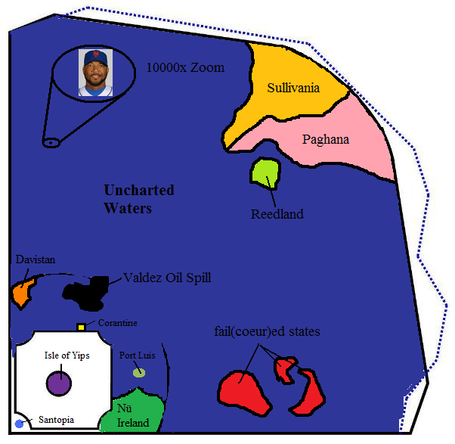 Must be the injuries, right? Don't assume. This season the primary culprits of poor defensive play have been: Gary Sheffield (-10 in LF), Luis Castillo (-9 at 2B), David Wright (-8 at 3B), and Jeff Francoeur (-7 in RF). Carlos Beltran and Jose Reyes also registered negative values, despite being historically good fielders.

I think part of the problem will resolve itself. David Wright has obviously been affected by the nagging leg injuries Jerry Manuel mentioned. Jeff Francoeur is probably suffering from a small sample-size fluke. Still, Carlos Beltran, Luis Castillo, Jose Reyes, and David Wright will all cary the baggage of leg injuries into 2010. In order to reduce this strain, improve the defense, and protect the Mets best investments for 2011 and beyond, I suggest a defensive shift. The Mets could easily move Beltran to left, where he would be a plus-plus-defender, bone bruise or not. In center, Reyes could take over, opening the door for a defensive specialist short-stop, or another centerfielder. Think of how Reyes' speed would translate to CF. A UZR greater than 10? I would bet on it. His bat certainly plays there. Alternatively, the Mets could pursue a Mike Cameron-type player. While Cameron, Nyjer Morgan, Marco Scutaro, or Mark Ellis aren't as attractive as names like Carl Crawford, Prince Fielder, or Matt Holliday, they could be just as valuable after a realignment of the defense, at significantly less cost.

On the pitching side, I think Mets fans (and media) have a hard time separating pitching from defense. Better fielding makes pitching look much better, which is why pitching is usually grossly overrated. Many think the Mets need a "#2 starter," and while I wouldn't mind another above-average pitcher to complement Johan, "#2" is a label, not an explicit need. With better team-defense, I bet Mike Pelfrey would fit many people's description of a #2. Take the Mariners and Rangers, for example. Both drastically improved their defense, the Rangers through a realingment of a star veteran (Michael Young) and by bringing in several good-defensive outfielders to rotate (Jones, Byrd, Cruz), something the Mets lack with defensive zeros Reed and Sullivan. Kevin Millwood has never looked so #2-ish. The Mariners brought in death-to-flying-things Franklin Gutierrez, allowing Ichiro to shift to right. They also brought in several defensive-specialists including Endy Chavez, Ryan Langerhans, Jack Hannahan, and Bill Hall, at minimal cost. The result? They traded Jarrod Washburn and his shiny new ERA, for a younger, better version of Jarrod Washburn. Now the Mariners field a rotation of averagish to below-average starters, on the cheap, masked by a great outfield defense.

Unfortunately, I'm not sure the Mets know the difference between pitching and fielding either, as the now-horrifying Putz trade facilitated the Mariners improvement, while costing the Mets their last defensively-useful backup. Realigning the defense, however, while adding fielding specialists on the bench is a creative and cheap way to build a good team that suits Citi Field.