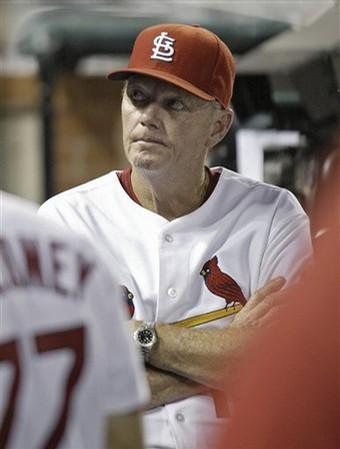 So, of the myriad difficulties facing the Mets this offseason, one of the most perplexing is the question of the starting rotation. Right now we have one known quantity in the person of Johan Santana. Niese is coming off of major surgery, Maine is an unknown (not saying anything good or bad, but he hasn't pitched for most of a season so we don't know) Pelf and Ollie have been maddeningly inconsistent, and in Ollie's case injured. Notwithstanding the recent successes of our fill in rotation (or the fab 4 as Chris Carlin called them tonight) they are for the most part back-end of the rotation pitchers (if that, in some cases), or still developing (read: Parnell) I've heard lots of possible solutions for this, and I'd like to suggest that maybe a change in oversight is needed as well as a trade. Nothing personal against Dan Warthen, but he does not seem to be the one to preside over the pitching staff any longer, although how much he could have done or did do to try and help Ollie and Pelf in particular I'm not sure. Fortunatly there is an answer out there, someone who can help right the ship, and that answer is Dave Duncan.

Duncan has been the pitching coach for the St. Louis Cardinals since 1995 when Tony La Russa started manging them. Before that he was the pitching coach for two of La Russa's other teams, the White Sox and then the A's. From 1988-1990 under his tenure the A's led the AL in ERA, and in 2005 the Cardinals led the entire league in ERA. However much weight you give to the Cy Young award, he has coached four of them over a span of 26 years, with Chris Carpenter in 2005 the most recent. His staff this season is nothing to sneer at either. Overall, he's consistently been one of if not the best in the business

Not only does Duncan produce excellent pitchers, he is also great at solving problem pitchers. When the Cardinals acquired Kyle Lohse last season he had produced a run of losing seasons starting in 2004 for the Twins. Lohse was 15-6 last season with a 3.78 ERA. He's been injured this season, so there isn't much of a sample size there, but I think the turn around is significant. John Smoltz had several bad starts in Boston before being released. In his first start as a Card he resembled the Smoltz of old, and he claimed that Duncan had helped him tremendously. Granted, his starts were against last place teams, but he's put up a 0.82 ERA since leaving Boston where he was 2-5 with an ERA of 8.33. Admittedly, these two example are shaky ground to base an argument on, but the rest of the staff speaks for itself. Since July 1st the top 3 in the Cards rotation, Wainwright, Carpenter and Pineiro are 28-4 combined. The Cardinals pitching over all is in the top 5 in the league in ERA, WHIP, ER and R allowed, and has given up the fewest walks this season.

Having shown his credentials, it would seem nuts for us to even consider stealing him away from the Cardinals, but there are two factors in our favor. Duncan's contract is up after this season, and he's not happy in St. Louis. His son Chris was traded away and was treated poorly by the St. Louis media. He has pondered ending his long partnership with La Russa, so he's open to the possibility of going elsewhere. Consider what he's done in St. Louis with Carpenter, Smoltz, Darryl Kile, and a host of others. I personally think he'd be able to turn things around here pretty damn quick. He is a mechanic and a problem solver; Pelf's yips and head games with himself should be easy going. Perez is just the sort of player that Duncan does best with. Say what you want about Ollie, he has definitely shown flashes of brilliance, even though of late they have been few and far between. Duncan could bring Ollie back to his 2004/2007 form, "Good Ollie" as some of us have called him. Duncan would also be an invaluable resource to the many young pitchers in the major league club and in the minors. I don't doubt that Mejia, Niese, and Holt would greatly benefit from his teaching.

Certainly having Dave Duncan isn't a magical cure-all for the Mets pitching issues, but it would certainly be a big help, and frankly we'd be stupid to pass him up. So please, Jeff, Fred, Omar, if you guys are reading this, give this guy a call, and get his ass to New York pronto. He'll come a lot cheaper than most of the other possible fixes you might be dreaming up. This is the sort of move that, while not excusing your previous collective bad judgment, might at least raise your stock a little bit and show us that you have some brains. I don't think I'm asking too much for you to at least consider him, unless of course Dan Warthen has some sort of unspeakably horrible blackmail on you, which is something else entirely. But anyway, I hope you'll take some inspiration from this, and next year we'll see Duncan in a Mets jersey. Thanks for your time.

Should the Mets hire Dave Duncan as pitching coach for 2010?