Quiz: Do you think the Mets would have been competitive, had they had no injuries? What about one major injury? Two minor ones?

There's no factual answer to those questions. Looking at my preseason WAR projections, however, I calculated that those players who missed significant time this season accounted for 40% of the teams projected production this season. In my opinion then, while recognizing other factors like underachieving players, bad roster management, and random variation could make the results very different than the projected 94 wins, the Mets would have been at least competitive with a healthier roster.

While the rash of injuries around this team exposed the Mets' depth issues, top heaviness, and in turn, Omar Minaya, they don't mean 2010 is necessarily lost. A recent Jayson Stark column, however, seems to subtly insinuate that prophesy with its three titles:

and of course: "Trading Jose Reyes could be a huge step toward jump-starting moribund franchise"

Granted this column was written by a guy who penned a book that argued Andruw Jones was "the most overrated CF of all time," more overrated than Juan Pierre even, so hyperbole and nonsense should be expected. Still, it's the most comprehensive forward looking article on the Mets, so naturally metsblog and others are weighing in on it. Matt Cerrone echoed the call for rebuilding (emphasis of everything except "SNY" and "Citi Field" his):

…the Mets need a three-year, re-building plan… the thing is, though i believe Mets fans are willing to see them through it, assuming the team is clear about what they’re doing, i don’t think ownership is willing because of SNY and Citi Field…

So before this "rebuilding" idea passes through the realm of opinion into inescapable fact/unanimous voice of the Mets fan, let's consider the content of this Stark piece. After some bad jokes, he begins:

The trouble with that, though, is this: As soon as this lost season is over, it will be time to contemplate a question almost equally scary:

The way he talks about the name of his column, you'd think it was the big scary monster that requires you to answer his riddle before you can cross the rightfield bridge. In fact, here's a picture of Mr. Grumblings promoting his new book Worth The Wait: Tales of the 2008 Phillies: 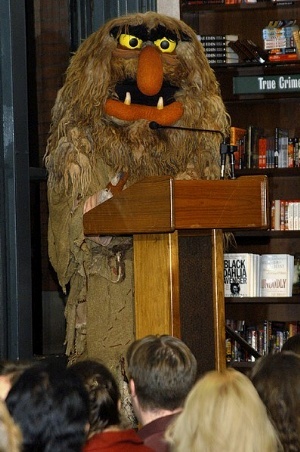 But before we get into what officials of other clubs think the Mets should do about this mess they're in, we want to give Mets GM Omar Minaya his take. And we'll say this about Minaya: For a man who has spent the past six months finding out what it feels like to be a human pinata, he's remarkably upbeat.

Oh boy this off-season will be like when MLB took over the Expos. You know, when Minaya traded prospects Grady Sizemore, Brandon Phillips, and Cliff Lee for a year of Bartolo Colon, the trade many consider the worst ever. What would be the modern equivalent, Fernando Martinez, Jenrry Mejia, and Jose Reyes for a year of Kevin Millwood?

"Positive" wouldn't be the word we'd use to describe the reviews we got from a half-dozen baseball men we surveyed about the Mets' future. Here's a sampling:

• "You look at their team and think, 'What does the next three or four years hold?' and it's not real pretty," said one American League executive.

Who cares if the person is an "American League executive"? If that's all you're going to get out of them, I'd rather read some guy rambling on a message board. At least he watches the team.

• "There's no quick fix out there for them," said a National League executive. "They've got to rebuild half the team on the field and the whole damn [starting] pitching staff."

• "They've got no choice but to rebuild," said an official of an AL team. "It's hard to do in New York, but they've got to bite the bullet for a couple of years and redevelop their system. I don't see that team as being a free agent or two away. I know that."

What does rebuilding mean? Trading Reyes/Wright/Beltran/Santana? That seems ill-advised. What if those two free-agents are Matt Holliday and Rich Harden?

• "They should probably get rid of the general manager and a lot of the people who have been there, and go in another direction completely," said a longtime NL scout. "Just blow it up. But I'm not sure how. They've got a lot of players that people don't want, guys who are making a lot of money, and they're overpaid. And there's not a whole lot in their system. So unless they outspend their mistakes, they've put themselves in a hole for maybe the next six to eight years."

OK, so not all the folks we spoke with were quite that bleak. This was, after all, a team that watched 19 players head for the disabled list this season.

Woops! I cherry-picked all those quotations! lolz!

So we did hear one comparison of this Mets team to the 2008 Mariners, another underachieving debacle of a club that got healthier, consciously set out to upgrade team chemistry and at least bounced back to respectability this year.

Horrible comparison. The 2008 Mariners planned to use Jose ".612 OPS" Vidro as their opening-day DH. The 2009 Mariners to set out to upgrade their talent and added Franklin Gutierrez and Russell Branyan, two of the most productive position players in the AL at minimal cost, and in one of those cases, at the expense of the Mets.

But after a season like this -- and the two painful finishes that preceded it -- can these Mets really take the approach that if they just tweak the roster a little and get everyone healthy, they'll be OK?

"Because I said so."

"Can I anonymously quote you as calling all of the Mets prospects garbage?"

"Sure. Now if you'd excuse me, I need to get back to watching the Vermont Lake Monsters."

"If they have an embarrassing September, I can see them cleaning house," said one baseball man. "If they play respectably, I'd bet both [Minaya and Manuel] keep their jobs. But if they don't -- if they don't even compete and it's embarrassing -- I'd bet they'll both be gone."

As big a nightmare as the big league season may have been, life wasn't exactly nirvana down below, either. The Mets' Triple-A and Double-A teams are a combined 60 games under .500. Not one full-season Mets affiliate has a winning record. And we haven't even gotten into the whole Tony Bernazard affair.

Yes, learning top prospect Tony Bernazard was in fact 53, not 19 as he claimed on his rookie contract and in an interview with SNY, was a hard pill to swallow. Oklahoma City is 7 games under .500. Why is that important? The Rangers top rated-farm system must actually be horrible.

"That's not a good system," said an AL exec. "The good prospects they do have are a long ways away. They don't have depth in their system or on their roster."

"the obvious approach is to trade off players," said the same AL executive. "But in that team's case, I'm not even sure that will get them where they need to go."

And why is that? We're about to tell you.

"What are they going to do for a rotation behind Johan [Santana]?" asked one scout. "Oliver Perez has turned into their Adam Eaton. [John] Maine has reverted back to a Triple-A pitcher. [Jonathon] Niese is a rookie. Bobby Parnell is Aaron Heilman all over again. [Mike] Pelfrey is just a [No.] 4 or 5 [starter]. So they have to go out and get at least two, and probably three, starters."

Perez will be the 5th starter, and will probably be passable in that role, assuming his health. Jon Niese looks like an average pitcher with above-average upside; not sure when "rookie" became such a horrible curse. Pelfrey is also  somewhere between average and above-average, despite whatever label people want to put on him this season. That leaves room for another good starter to complement Johan and some decent depth additions.

"They need to think character, and bring in high-character players," said one baseball man we surveyed. "The single greatest difference between the Phillies and the Mets is that the Phillies have guys in their clubhouse who care about each other and they're all about winning. The Mets don't have nearly enough guys like that."

So the logical solution is: Trade one or two of those stars. Re-stir the mix. And help heal the scars left by three straight seasons that turned out all wrong.

Logical must mean something different these days.

Mr. Stark either: A. has a split personality named Mr. Grumbling who he is agreeing with, B. is giving a subtle hint that this whole article is parody, C. forgot he said the same thing three sentences ago.

Santana? No way. K-Rod? They just signed him.

So? They just signed him...last year. I know they won't trade him, but I can still hope.

So now we're down to two: Carlos Beltran and Jose Reyes.

"If you conclude that's the solution -- that you have to make a change to your core group -- then you have to trade one of the two of them," said one baseball man. "And it has to be Reyes."

So why is that? Because Beltran has a complete no-trade clause. And because he has $37 million left on his contract for the next two years. And because his 2½ months on the disabled list, with what is still being described as a "bruised knee," haven't exactly made him the most attractive trade candidate alive.

But if the Mets don't trade him, does that mean they don't trade anybody? And if they don't make some kind of significant change to a mix of players their fans have lost faith in, can they possibly sell the 2010 Mets to a town where Yankees caps now seem to outnumber Mets caps by about 1,000 to 1?

Stark's specious logic overcomes the one rational executive he quoted in this whole piece. Wanna convert a bunch of Yankees fans to Mets fans? Trade their second best player. Sell low, buy high. Good work team, the ticket orders should start rolling in. 2010 Mets: "Maybe, because they might be."

So you thought the past five months felt like a ride on the Titanic for this team? Uh, stay tuned. The GM says he likes challenges, right? Well, we hope so -- because, if he hangs onto his job, the biggest challenge of his career hasn't even begun.

Wouldn't a five month ride on the Titanic be a good thing? Or did it take five months to sink into the ocean? What did they say about the Titanic before it set out? "No, because it won't sink."?