Carlos Beltran is back, for better or worse. For the 2009 team I suppose it's clearly for better, as Beltran gives beleaguered fans another reason to tune in on a semi-daily basis. He went 1-for-4 in his return tonight with a double, a nice sliding catch in the eighth, and came a few feet shy of a momentum-shifting grand slam in the bottom of the seventh. Beltran claims to be at 100%; rusty, but pain-free. I used to think that if the medical staff cleared him to play then that was good enough for me, but that's a tough sell these days. A couple of months ago it looked like microfracture surgery on Beltran's knee might put him out of action for the rest of 2009 and much -- or all -- of 2010. A second opinion prescribed rest and now Beltran's playing big league baseball again. I have no idea if his playing these last few meaningless weeks could negatively affect his availability in 2010; I suppose something disastrous could happen on the field, but I suspect a bit of running, swinging, and other baseball activities probably won't cause any undue damage. I also suspect that he'll spend much of the offseason resting and conditioning so he can be ready to go for next year.

Tim Redding fell off the horse of a few straight decent starts and laid an egg, giving up four runs on five hits and four walks while striking out four. Bullpen MVP (?) Elmer Dessens pitched a scoreless inning of relief, while the Mets' seventh inning bullpen committee of Ken Takahashi and Sean Green managed to record three outs without allowing a single Marlin to score. Brian Stokes and Pedro Feliciano combined to pitch scoreless eighth and ninth frames.

Angel Pagan, shifted to left field to make room for Voltron, went 2-for-4. Jeff Francoeur went 1-for-3 with an RBI and his second unintentional walk in the last two games. David Wright went 0-for-4 with two strikeouts, one with the bases loaded in the seventh. Josh Thole's two game hitting streak to begin his career is officially kaput, as the Mets' young catcher went 0-for-3 with a sacrifice fly.

Pat Misch takes on Ricky Nolasco at 7:10pm on Wednesday. 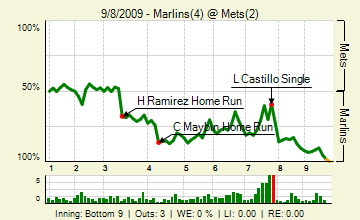