With Sean Green, Pedro Feliciano, and Jeff Francoeur all setting on 2010 contracts with the Mets yesterday, we inch closer to a fully-realized 2010 payroll picture. 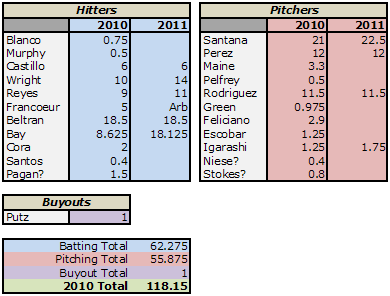 We're still short at least a few players here, though depending on what -- if anything -- the Mets do in the next few weeks with respect to the starting pitching market, guys like Nelson Figueroa and Pat Misch could very well find their way onto the Opening Day Roster.

The players with question marks are guys who I'm either a) unsure about their 2010 salary because they're arbitration-eligible and haven't yet settled on a figure, or b) might not actually make the team out of Spring Training but for now they're holding a place in the spreadsheet. Pagan is likely to make around $1.5 million when he eventually settles, and he should be worth every penny if he can avoid the disabled list for long swaths of time.

The first thing that strikes me about this table is that $118 million seems way too low, but they did jettison Billy Wagner's and Carlos Delgado's contracts, and Bay is only costing them $8.125 million ($6.5 million salary plus $2.125 million -- one-fourth of $8.5 million -- of his signing bonus) in real money (his luxury tax hit is $16.5 million but the Mets aren't likely to sniff the luxury tax threshold). I also only count four starters with Jon Niese as a throw-in even though we all know he probably already has his ticket punched for Buffalo.

If the Mets sign either Ben Sheets or Joel Pineiro, that'll add $8-12 million to the bottom line; even John Smoltz would cost $4-5 million in most realistic scenarios. Then we have the issue of first base, where a Russell Branyan-type might be a nice fit at $3-5 million. Any combination of those players, plus a few million here and there to fill out the roster with organizational filler, and the payroll is up around $130 million, which is right around where we all expected it to be. There are also performance bonuses that could add another $5 million or so, including an easy $700k if Blanco doesn't hurt his shoulder and $2 million for Escobar based on games pitched.