A Reminder from David Wright

Share All sharing options for: A Reminder from David Wright 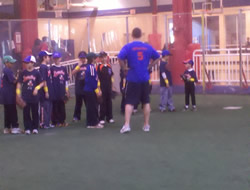 On Saturday, I attended an event at Chelsea Piers where David Wright presented awards to a few lucky "After School All Stars" and led a baseball clinic for some more fortunate youngsters. Beforehand he answered a few questions about the team's new front office (he hadn't talked to Sandy Alderson yet but looked forward to doing so), Carlos Beltran's possible move from centerfield (he said he'd be "shocked" if Carlos wouldn't at least be open to it), and CitiField's dimensions (he feels Justin Morneau's pain).

There's more extensive coverage of his remarks elsewhere, but the event impressed me beyond anything Wright said. Not that I'm jaded; being in the same room as a major league superstar is still pretty awesome, and I couldn't think of a single thing to ask the man that would have progressed beyond Chris Farley Show-level questions.

The thing that impressed me was being surrounded by young Mets fans, ages 5 to 15 (give or take a year), who were ecstatic over the chance to work out with one of their heroes. A room full of kids all decked out in Mets hats and Mets jerseys (most but not all Wright jerseys), lugging equipment bags with Mets logos, asking David Wright questions and rapturously waiting for his answers. And nearly all of their parents/guardians in some type of Mets gear as well.

I found these scenes heartwarming, in part because I'm a parent, and in part because for a few fleeting moments, it helped push aside the unrelenting negativity around the team. For a few moments, there was nothing but a player and people who loved him. It reminded me that, despite what we're told and despite what we often think, being a Mets fan isn't an unremitting gauntlet of torture.

We get hung up so often on how frustrating this team is, how much they drive us nuts and do dumb things and put us through hell. We listen to the Mike Francesas of the world when they tell us the Mets are a second class organization, and the organization itself occasionally plays the part perfectly. We hear how they are the "second team" in town and really, why even bother rooting for them because they'll never be any good?

In short, when we think of Mets fans, we think of angry, frustrated guys from Babylon calling up WFAN, or poor schlemiels clasping their hands over their head in utter disbelief. We don't hear about things like what I saw on Saturday. Not that this is unique to the Mets. Misery is more compelling than happiness; I can't imagine seeing a headline, no matter how true, that said EVERYTHING IS GREAT!

But I also think there is a belief among all fanbases (save the Yankees') that we have to compare our scars and see whose are worse. Read any team blog and you don't have to dig too deep to hit a use of the phrase "long suffering", or complaining that such-and-such a move/non-move/outcome is "typical [TEAM NAME]", with an implied sigh. Some deserve the mantle (it's hard to argue Indians fans aren't long-suffering) more than others (both the Phillies and the Red Sox, despite recent dominance, still have lots of misery in their fan DNA).

When it comes to the Mets, I'm just as guilty as anyone else; search my site for "Mets" some time and you won't find too many cheery posts. But I feel like I'm at a point in my fandom and my life where I have to give up the OH, DA PAIN! attitude. So I'm going to make the bold move of declaring that being a Mets fan is not total misery. There, I said it. I'd say it again if I had to.

Despite fallow periods in the team's history and some truly rotten seasons just passed, I can't call Mets fans long suffering. There is enough magic and improbability in their history for five teams. I once heard Jerry Seinfeld call Steve Somers (yes, this actually happened), and he said (I'm recounting from memory here) what the Mets' success lacks in quantity it makes up for in quality. As I found out recently while researching both 1999 and 2000, both years were full of the kind of ridiculousness that makes sports worth watching. Add to that 1969, 1973, 1986, and yes, even 2006. How many teams can lay claim to similar levels of insanity?

The Mets play in the same city as the Yankees, which some see as a curse, and that's an understandable perspective. And yet, it makes me appreciate the fans even more. In a one-team town, people will follow a team out of a sense of civic pride or duty. Not rooting for them is not an option. Rooting for the Mets is definitely an option, and yet look at how many people choose that option.

If all of this seems sentimental or sappy or even a bit obvious, I only write it because I think we need the occasional reminder why we love this team in the first place. When I see a whole room of Mets fans, bringing their Met fan kids to listen to and play with David Wright, after a season that could be charitably described as trying, I know those people are not there because they think they can get a quick photo op or some autographs to sell on eBay. That's not masochism or blind faith; that's true fandom, and I think it's worth celebrating.

It's a long winter. Rather than worrying about the managerial choice or the payroll or Oliver Perez, try thinking about something like this. It'll make those cold months pass a bit easier.

(Thanks to Pirate's Booty and their Snack the 'Wright' Way David Wright Baseball Clinic for inviting us to this event).