I read a discussion among Rays fans about Ike Davis yesterday*, in the context of potential trade for Matt Garza or James Shields. These fans were divided on whether Davis fit the Ray's biggest need, a young, slugging first baseman. Considering such a trade from a Mets' perspective, I realized, for the Mets too, the determining factor is Davis, not the Rays' relatively established pitchers.

Currently, Ike might be the Mets' most valuable trade asset, because of his cheap team-controlled contract for the next 5+ seasons. That value, however, assumes a certain level of improvement and production, both above replacement-level, obviously, and above his team's standards. For instance, Casey Kotchman has been worth $19.1 Million, according to fangraphs WAR, over the past 7 seasons, while making only ~$9 Million. Yet for the past three seasons, he's had little to no trade value, because the Red Sox, Braves, Angels and even Mariners expected better than slightly above replacement from their first baseman. Tampa would likely need something better than 1.5-2.5 WAR Ike Davis to compete in the A.L. East. The Rays fans against trading Garza for Davis were basically betting on Casey Kotchman.

Ike's rookie season, by nearly every estimation, was a success. He exceeded his 90th percentile PECOTA forecast of .255/.328/.445 and 0.9 WAR by 18 points of OPS and 2+ wins. Every major fielding statistic (RZR, UZR, DRS) credited him as the best fielding first baseman in the National League. He lagged barely behind Rookie of the Year heir apparent Jason Heyward in walk rate, home run rate, and isolated power. So what lies ahead for Davis? Here are how some similar rookies turned out:

After a pretty good rookie season, Bagwell's natural power and plate discipline elevated him to Hall of Fame-caliber slugger. All the while, he remained a plus-defensive first baseman.

The Ike-Keith comparisons are unavoidable because of their shared handedness and athleticism. Like Olerud comparisons, however, this one falls short of describing Ike's bat, which was a more classic power-hitters profile: good power, but poor contact. Keith never hit more than 18 homers in a season, Ike obviously already has.

Why Ike is Keith Hernandez

Why Ike is not Keith Hernandez 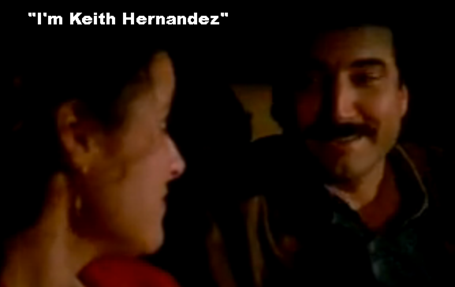 The Adam LaRoche-Ike Davis comparison has some obvious points of reference: strikeouts, power, handedness, and a hitched-swing. However, LaRoche has never been one to walk, and fielding metrics unanimously hate his defense. If Ike picks up some of LaRoche's power, most Mets fans would be happy, but only because he'd already be much better than LaRoche.

If you really think Ike Davis=Adam LaRoche, it's probably worth trading him for James Shields or Matt Garza. Adam LaRoche never got any better after his rookie season and probably would never find a place on a Sandy Alderson team.

Kotchman's first full season has been his best. After 2007, his free-swinging ways caused his power to evaporate and his contact skills fall off a table. Meanwhile, his fielding stats look worse every year. Now he's useless. While Kotchman and Ike have seemingly disparate K%, they share similar O-swing% (swing% on balls outside the strike zone).

I haven't made up my mind on Ike Davis. While he posted a lower OPS than all of these comparables, most of them benefited from some past major-league experience. I only compared full seasons for the sake of more representative data, but Ike's being a true rookie certainly helps his prospects.

The main factor that suggests to me he may genuinely grow from his rookie year is the prodigious power, but I'm not even sure homerun distance is that indicative. His September-surge was also encouraging, but it's hard to say how much of that was genuine improvements. His is a case I'll almost certainly revisit, particularly when projections start coming out.