Continuing in my recent mini-run of stealing other writer's ideas and applying them to the Mets, today I'll steal a column from the good work done by Adam Peterson over at SBN counterpart Twinkie Town. Peterson looked at Baseball America's projected future lineup from 2007, and found that the site did a good job of predicting the future Twins lineup. The site got 11 of 15 lineup spots correct, and really that number should have been 12 because Johan Santana was SOMEONE's number-one pitcher, just not the Twins'.

Perhaps you deduced from the title, but Baseball America didn't do as well with the Mets. Check out their predicted lineup after the jump. 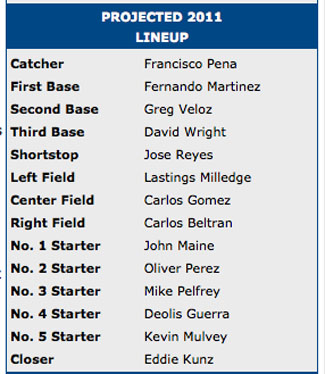 Ummm... yeah. Not so good. By my count, BA got four names right out of fifteen, and only two (maybe three) are in the right position on the chart. If we extend this to other teams' lineups, we only get Lastings Milledge and Carlos Gomez as possible additions - but neither of the two is starting for their respective teams, so really the number is four.

One interesting note as we go into the upcoming season is that Carlos Beltran was predicted to move to right field by now, which may be relatively prescient. It seems like the right thing to do with Angel Pagan in town and Beltran on wonky knees. It's also interesting that Fernando Martinez, a centerfielder at the time of this writing, was predicted to end up at first base. His defensive decline must have been easy to see coming from a scouting perspective.

The largest whiffs come in the pitching staff. Seems like Baseball America was duped by young Oliver Perez, but putting him as a future number two starter was a tad.. optimistic. Is the book closed on John Maine? If it is, he never once sniffed number-one-starter status. Mike Pelfrey actually is a "number two" or "number three," so at least they got 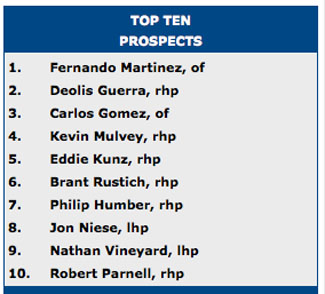 that part right. But Eddie Kunz as even a viable major league reliever, that is a flat-out whiff. He'd already debuted at the time of this writing, and as a 21-year-old college pitcher in rookie ball, struck out six per nine and walked six per nine. That is not the debut of a future closer, even given the small sample size.

We have to be careful not to blame this all on Baseball America. The Mets also had high hopes for some of these players - although they did well to trade Carlos Gomez, Lastings Milledge and Deolis Guerra away, so they must have known some of the shortcomings of their own players. Still, some of the blame goes to the Mets for failing to develop their players correctly, or on the Mets for failing to pick the correct players. The Twins are known for their ability to develop their pitchers, and they've got a ton of homegrown pitchers filling their staff.

And yet, Baseball America listed Brant Rustich as having the best fastball in the system. Philip Humber had the best curveball, Kevin Mulvey the best slider, Deolis Guerra the best changeup and Dylan Owen the best control. They littered the above top ten with those names, too. Seems like they had a hard time predicting future major league pitchers, at least when it came to those in the Mets' system. That's okay, it's a tough business.

As researcher Tom Tango noted on his blog for The Book, it would be nice to know how Baseball America (and other scouting-driven analysts) would do against a number-based system.