Share All sharing options for: Let's Go to the Videotape: 1987 Year in Review 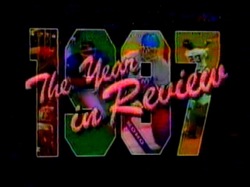 This week, I bring to you a relic from the distant, hoary past of 1987. The clips come from a half-hour year-in-review special produced by Sports Extra, the long-running Channel 5 weekly highlights show.

If you didn't have cable in the 1980s (and if you lived in the Tri State Area back then, that was more likely than not), your choices for sports highlights were limited. There was always The George Michael Sports Machine, but since that was a nationally syndicated show, there was no guarantee The Machine would cue up any of your favorite team's highlights. I remember a series of weeks in the middle of baseball season where Our National Pastime was barely mentioned at all so that Mr. Michael could dedicate the airtime to extensive rodeo coverage. No offense rodeo enthusiasts, but that still infuriates me in retrospect.

If you wanted lots of highlights of New York teams and the occasional softball interview with their stars, there was only one place to turn: Channel 5's Sports Extra. When it began in the 1970s, it was one of the first (if not the first) examples of a nearly extinct breed: the Sunday night sports highlight show. It was really just a video week in review, which seems like a quaint idea nowadays when you can turn on ESPN any time day or night to view the day's highlights. But in a less frenzied media cycle, Sports Extra was a godsend.

The show was hosted by Bill Mazer for over 20 years. Mazer did double duty as channel 5's six o'clock news sports guy and also had a radio show in the early days of WFAN that broadcast live from Mickey Mantle's Restaurant. (I recall another WFAN personality, Don Imus, saying you could win a free meal at Mickey's by guessing what table he and Whitey Ford had drunk themselves under.) If you take a peek at his Wikipedia entry, you'll see he had a pretty interesting and diverse résumé.

Mazer was a very old school, very New York kind of newsman. You could imagine him at a press conference actually wearing a fedora with a press pass in the band. He was kind of like a beefier Gabe Pressman. That's why I thought it was so funny that each show opened and closed to the tune of "Rock It!", a horn-section-and-guitar workout instrumental track by Earth Wind and Fire. Perhaps Bill was funkier than he looked.

But I'm not here to debate the funkiness of Bill Mazer. I'm here to present this brief retrospective of the 1987 Mets.

As you may recall, 1987 was the year Doc Gooden missed the first two months of the season due to drug rehab. This video has some interesting archival footage from those tumultuous times, including Doc's public apology, one of his minor league tuneups for Tidewater, and him warming up on the Shea mound prior to his first post-rehab start. Gooden himself does not discuss the issue for this special, however. GM Frank Cashen does all the talking. Literally.

If you're wondering why Doc's drug use was such a huge deal, it was in part because everything involving Doc was a huge deal back then. This was also a few short years removed from both Len Bias's death from OD and the Pittsburgh drug trials (which nearly got Keith Hernandez suspended for a year), both of which made cocaine use by pro athletes a hot-button issue. All sports made recreational drug use their number one priority, and MLB was no exception. Ironically, as they turned their full attention to recreational drugs, steroids were just starting to creep into the game.

The rest of the video has some painful memories of how 1987 ended for the team, and some bold predictions from both Cashen and manager Davey Johnson. The video quality is not fantastic, but I think its historical worth far outweighs its visual deficiencies.

As a study in contrasts, and to see how much has changed since then, I also present this look back at the Yankees circa 1987. As you may or may not remember, the Yankees enjoyed success for much of that season until injuries befell Don Mattingly, Willie Randolph, and a few other key players. Luckily, George Steinbrenner was around to pour gasoline on the fire, instigating ugly public incidents as he was wont to do in those days.

The clip closes with Lou Piniella being bumped up to the front office, and the manager's seat being taken over by Billy Martin for an insane fifth time. Another bang-up decision there, Georgie.