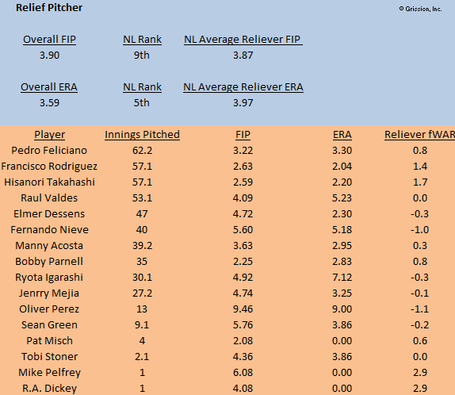 2010 Postmortem: The series which lasted longer than the postseason.

Mets relievers were average at best this season. Yes, the ERA was shiny, but they were below average in strikeout and walk rates. Home run suppression was their biggest asset, aided by Citi Field's friendly confines and also a decent 45.3% groundball rate. Perp-Rod was having a nice season as closer, then he assaulted his father-in-law. Hisanori Takahashi took over the role, converting all eight of his save opportunities. A true saver. Tak2's November 5th deadline to re-sign might pass without a new contract.

For this analysis, I will look only at relievers who pitched at least five innings out of the pen. I'll play word association (what comes to mind when I hear the pitcher's name), provide a semi-interesting number/statistic from 2010 and share some thoughts on the pitcher's Mets future.

Some other internal and external bullpen options for the Opening Day roster include Dillon Gee, Mike O'Connor, Dan Wheeler, Chad Gaudin, Jon Rauch, Hideki Okajima, Randy Choate, Will Ohman, Dennys Reyes, Bobby Jenks and Brian Bannister. A lot will happen between now and Spring Training, but for the sake of completeness here are my desired and shot-in-the-dark projected 2011 bullpens: