Share All sharing options for: Every Pitch Counts: Jonathan Niese

When you play for the Mets and were born on October 27, 1986, you carry with you a certain amount of expectation. (Words of advice for Pedro Beato.) Jonathon Niese enjoyed his first almost-full season on the mound in 2010 (a hamstring injury in Florida put him out of commission for a few starts) and had the kind of year you might expect from a rookie hurler.

There were flashes of brilliance--like his complete game one-hitter against the Padres--and some growing pains, particularly at the end of the year, when he was clearly worn out from increased workload. In August, he gave up at least seven runs in three outings, and finished his year by allowing six runs in each of his last three starts (though in several of these appearances, shoddy defense made some of the runs unearned).

A predictable regression aside, Niese's season was, in aggregate, promising. Considering the Mets' finances, they're unlikely find another pitcher worth 1.9 WAR that they can afford to sign. (Jon Garland, owner of a brand new $5 million contract with the Dodgers, was worth 0.8 WAR in 2010.) Before Niese's late-season swoon, David Golebiewski at FanGraphs wrote a nice post about his value as a pitcher versus how much he's cost the team thus far.

Then again, looking at the numbers, it's hard to know what to think of Niese's year. His ground-ball rate was a slightly-better-than-average 47.7 percent, yet he gave up 20 home runs. His BABIP of .335 indicated a slight bit of bad luck, but his BB/9 of 3.21--and his overall tendency to put runners on base--meant he made a lot of trouble for himself. His fastball rarely (if ever) topped 91, but he managed a respectable K/9 rate of 7.67.

Long story short, the stats tell a conflicting story. If Niese's season was promising, what exactly does it promise? And does his pitch-by-pitch count selection hold any answers to that question? I'm glad you asked! Results after the jump.

First, a disclaimer of sorts. When I did my pitch-per-pitch count post on Mike Pelfrey, there were a few comments about using pitch data from Texas Leaguers, which comes from MLBAM's Gameday charts, which I know a lot of folks have beef with. So this time I've done charts using results from both Texas Leaguers/MLBAM and FanGraphs, which gets its data from Baseball Info Solutions, hoping that this will enable us to reach some sort of consensus.

I should note that FanGraphs only lists percentages of pitch-per-pitch-count, not raw data, which means certain calculations must rest only the MLBAM approach. And if you trust neither source, well, c'est la vie. 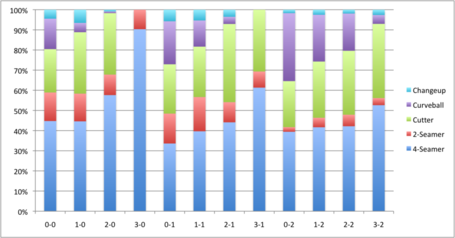 There are some obvious differences in these taliies, even apart from the fact that MLBAM thinks Niese throws a two-seamer and FanGraphs does not. MLBAM thought Niese threw his fastball less frequently than FanGraphs did. For instance, the former believed the lefty threw his four-seamer about 35 percent of the time on 0-1 counts, while the latter considered his 0-1 fastball rate at a much higher rate (49 percent). The cutter figured a bit more prominently in Niese's repertoire according to MLBAM's assessment. I presume MLBAM's inclusion of the two-seamer to be the culprit for these discrepancies.

Niese's only other pitches are his changeup, which he rarely used in 2010, and his curveball, which he busted out a bit more frequently. Combined (according to FanGraphs), he only threw these pitches 18.9 percent of the time (MLBAM says 18.5). However, he was comfortable enough with his curve to throw it quite often during 0-2 counts--roughly a third of the time, according to both assessments. In this regard, he's already progressed farther than Pelfrey, who appears to do everything possible to avoid using offspeed and breaking pitchers.

MLBAM's data says, when leaving out 0-0 counts, Niese threw pitches in three-ball counts a mere 10.2 percent of the time. I find that surprising, considering his relatively high BB/9 rate. My best guess is, though Niese stayed away from three-ball counts, he tended to walk batters once he found himself in them--not an uncommon ailment for young pitchers.

In light of his relative small amount of three-ball counts and with a nearly full year of major league experience under his belt, I'd expect much fewer walks from him in the future. I'd also expect fewer home runs when taking into account his ground-ball rate and the fact that he was more often ahead in the count to batters (38.7 percent of his pitches) than behind (32.4 percent).

There's evidence enough to be optimistic about Niese in 2011. The high number of home runs, walks, and base runners seem anomalous when compared to his other stats, and indicate he is capable of cutting down on all three next season. He definitely has the potential to be a solid middle-rotation starter. Unfortunately for the Mets, thanks to Johan Santana's shoulder, he will probably be the default number two starter to begin the season.