GMs and PEDs: Reps versus Realities

Share All sharing options for: GMs and PEDs: Reps versus Realities 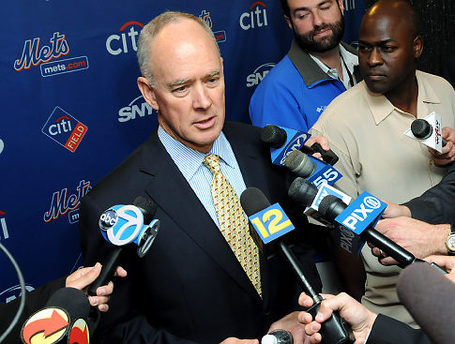 When Sandy Alderson was hired as the Mets' new general manager, certain segments of the New York media felt he needed to make an accounting of himself. Not for virtually creating modern baseball front office management, or for mentoring Billy Beane and his many sabermetric acolytes, but for steroids.

Because Alderson was the architect of the Oakland A's teams of the late 1980s/early 1990s--seen as Ground Zero for the sport's performance enhancing drug explosion--some consider him partially responsible for baseball's 'Roids Era. ESPN New York's Ian O'Connor went so far as to demand he apologize at his introductory news conference for fostering the major league careers of Mark McGwire and Jose Canseco. During that presser, a few reporters asked him questions related to steroids, as did Mike Francesa when Alderson appeared on WFAN.

The subject came up again when the Mets signed catcher Ronnie Paulino, who will miss the first eight games of the 2011 season as the tail end of his 50-game suspension for PED use. Had another GM signed Paulino, I doubt he would have had to justify the move, but the fact that Alderson did so raised flags amongst the sports press. Even writers who don't necessarily agree with holding Alderson culpable for steroids feel compelled to ask him questions on the subject, because it is part of the narrative surrounding him as a baseball executive

Personally, I think this assigning of blame and desire for accountability is ludicrous--especially coming from a sports press that was just as complicit as any other party with its silence on the matter. But I'll play devil's advocate with myself and assume the opposite: That steroid use is a very bad thing for which certain GMs need to apologize.

The question then becomes, exactly who should delivering the mea culpas? The crux of O'Connor's article was that Sandy Alderson had to have noticed steroid use in his clubhouse and done something about it. But we can't assume that steroid use was more noticeable on his teams than any other. Unless you think Alderson was handing out free samples of andro and Winstrol with every contract, he can only be held responsible for acquiring players who made the decision to use PEDs.

In an attempt to answer this question, I've taken a look at every transaction involving MLB players definitively connected to PED use--and which GMs were responsible for said transactions. Explanation and results after the jump.

The players used to generate these results either appeared in the Mitchell Report or received MLB suspensions for PED use (sources: Wikipedia rundowns located here and here, respectively). For suspensions, I've restricted this list to players who've appeared in the major leagues, because records for such players are much more comprehensive than those for career minor leaguers (and I only have so many hours left in my life).

I've also added four key players who fit neither category but have been accused in a public forum (news reports, books, etc.) and are known to have used PEDs. McGwire and Sammy Sosa have been placed in the Mitchell Report list since the bulk of their playing careers occurred during the period scrutinized by the report. Alex Rodriguez and David Ortiz were added to the suspension list, despite never being suspended, because their respective revelations occurred after baseball instituted its PED use suspension policy.

I've determined every transaction involving these players, according to the info on each player's page at Retrosheet, and which GMs were responsible for each individual transaction. This includes draft, trade, or signing but not contract extensions. If a player was acquired by a team, then became a free agent and resigned without playing for any other team in between, that counts as two separate transactions.

I've also calculated as closely as I could how much time spent in a particular organization resulted from each transaction. For instance, if a GM drafts Player X and he stays in that organization for 8 years, Player X's 8 years with that team go on the GM's ledger, even if said GM is succeeded by another one at some point during those 8 years. GMs are credited only with trading for a player, not trading one away.

Service time is calculated on the basis of seasons. Obviously, the issue can get thorny when a player is acquired during June of one season and traded away the following April. Fractional service time has been added up to the best of my ability. When in doubt, I've rounded up. In other words, these are ballpark figures and should be ingested with a liberal amount of salt.

So now that you know the methodology, here are the results. These are the top 10 GMs who made the most transactions involving players named in the Mitchell Report. (If you have several hours to spare and want to see the complete results, here's a player-by-player rundown.)

It's a fairly diverse list, and a successful one. While acquiring these players, the GMs in this top 10 were responsible for teams that won 21 pennants and 11 World Series titles. Three of them--Cashman, Jocketty, and Schuerholz--helmed their respective teams for at least a decade and enjoyed enormous success and praise without any serious debate that they were part of the PED problem. With the possible exception of Brian Sabean (erstwhile employer of Barry Bonds), no one in this list is tarred with the epithet of Steroid Enabler.

The much-maligned Mr. Alderson? He made only 8 acquisitions of players named in the Mitchell Report. That's less than a third the total of the leader, and 32nd out of 93 GMs responsible for acquiring such players (tied with three other GMs, among them his current employee, J.P. Ricciardi).

Here's the totals for the top 10 GMs who acquired players suspended for PED use. (Full list here.)

Once again, for the most part this is a successful, well-respected group of GMs. One of them (Gillick) was just voted into the Hall of Fame, without a single steroid-related objection raised by any serious journalist. Alderson, meanwhile, was responsible for signing exactly two suspended players, one of which is Paulino (though he is obviously helped by the fact that, until this offseason, he hadn't been a GM since 1998).

However, we do get a slightly different picture if we look at the cumulative amount of service time produced by these GMs' transactions. Here's the leaders in service time handed out to PED-tainted players (both Mitchell Report and suspended).

Here, Alderson finally makes an appearance on the winner's board, coming in ninth. But he's also joined by some new, long-forgotten suspects like the Pirates' Cam Bonifay and the Dodgers' Fred Claire, responsible for an astonishing 91 seasons' worth of service time for PED users. Not bad for a guy most of us couldn't pick out of a lineup.

What do these GMs have in common? Most of them began their careers as GM in the 1980s or early 1990s, and were in charge of teams well into that decade. This means they were around for the both the steroid explosion and the pre-strike collusion years, when salaries and draft pick signing bonuses were low compared to today. In a time of stagnant salaries and reduced mobility, players were more likely stick with the team that drafted them for a longer period of time. If you drafted a future steroid user circa 1987, he was liable to stay in your system for 7-8 seasons, which is far less likely nowadays.

That's how a GM like Alderson, who has a grand total of 10 PED-related acquisitions on his ledger, can be "responsible" for 56 seasons of service time for those players. This includes 14 seasons for Mark McGwire, 10 for Jason Giambi, and 11 for Miguel Tejada in Oakland and its minor league affiliates. Fred Claire stacked up his totals thanks to the Dodgers' traditional reliance on its farm system; Paul LoDuca and Eric Gagne each spent 12 seasons with the Dodgers' organization because of his draft choices.

Conversely, if a GM's career began in the late 1990s or early 2000s, he dealt with exploding free agent prices and the greater player mobility that resulted from it. Thus, he made more transactions and was more likely to acquire PED users in those transactions than his predecessors, but would be ultimately responsible for less service time per transaction. Though Brian Cashman made 45 acquisitions of PED users, the average time those players spent in the Yankees organization was less than two seasons, even accounting for players like Giambi, Andy Pettitte, and Roger Clemens.

Reputations are hard to adjust or correct. Some people will always blame Alderson for steroids, and there's little he or anyone else can do to change that. But if you want to play the Blame Game with steroids, Alderson is, at worst, the ninth-most "guilty" GM in baseball. On a pure acquisition-by-acquisition basis, he is much further down on the list. If we're not going to vilify Brian Cashman or Pat Gillick for their "guilt"--and I don't think we should--then Alderson certainly doesn't deserve such treatment.

Unless you want to hold Alderson responsible for the major league career of Jose Canseco, the Johnny Appleseed of steroids. Problem is, he didn't draft Canseco--his predecessor, Billy Martin, did. If Billy were still with us, I doubt anyone would ever accuse him of fomenting steroid use in baseball. Mostly because he'd break your jaw if you did.