I had planned on discussing the process of selecting and contacting (and desperately pleading with) potential contributors to the Amazin' Avenue Annual, but last night we spent an inordinate amount of time making decisions about the cover so I wanted to share our experience with that instead. The great news is that we put together a cover design that we all love. The bad news is that it doesn't look like we're going to be able to use it. Let me explain.

Last year we went through a number of iterations before settlings on the final cover design, which featured a photo of Jose Reyes (taken by Michael G. Baron of Metsblog and MetsPhotos) and worked really well overall. The print version looks even nicer, as the author box at the bottom is more of a golden orange on paper than the dull yellow it appears to be on screen. If it looks like Reyes started his dive a little early it's because we slightly altered the original photo to make room for the bullet points.

For this year's cover we wanted to keep most things the same and maybe tweak a few things we didn't love about last year's, plus choose a new poster boy for the book. When you pick up a book like this it should be instantly apparent what you're holding. Since we're not famous authors and don't have huge, established followings to rely on for book sales, we need the cover to be compelling to the sort of person who would buy a book like the Amazin' Avenue Annual, and that sort of person is a Mets fan (or a friend/relative of a Mets fan). At the very least, it has to be clear that it's a book about the Mets, and I think the general design idea we established last time accomplished that.

For the sake of comparison, check out the cover of the forthcoming Process Report 2011 annual. I love the cover design here on a number of levels: it's minimalistic, eye-catching, and creative. However, to look at the cover is to know nothing about the book's contents, which might be a problem for potential buyers. (It won't be for myself and other regular readers of TPR, but I'm already familiar with the great work of Tommy Rancel, R.J. Anderson, Steve Slowinski, and the other annual contributors).

To some degree, our desire to appeal to fans beyond the immediate reach of Amazin' Avenue steered the cover model decision to David Wright. We considered other possibilities but rejected each for one reason or another.

So after considering and then ultimately rejecting a few other options, we decided on Wright, which is a choice that should satisfy most everyone: hardcore fans, casual fans, statheads, and tweens. Now that we had the cover model we still had to find a suitable photo, which is really where the fun (read: time-sucking misery) began. We looked at a few of different types of shots: pre-swing, extended swing, throwing to first, ready in the field, and a couple of others. Michael G. Baron generously offered his photo services to us again this year so we spent a lot of time looking through his catalog.

After spending a few minutes poring over David Wright photos we learned something that we hadn't previously noticed: Wright makes a lot of goofy faces when he's playing, never more so than when he is at the plate. He sticks out his tongue, he purses his lips, and he makes all manner of goofy grimace between the time he steps into the box and the time he steps out of it. So much so that we couldn't find a shot of Wright at the plate that we really liked among Baron's expansive photo archive.

We did find a couple of other interesting shots that we toyed around with, though. Here are a few sample covers that we nixed for one reason or another (click on any to embiggen). 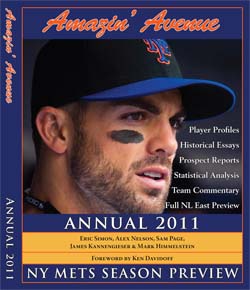 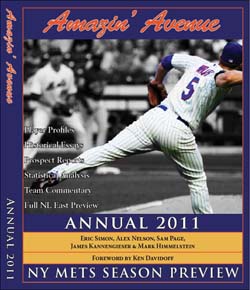 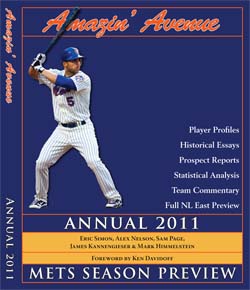 We liked the first two for varying reasons, though neither wowed us. The first was deemed a little too GQ-like; the second was appealing but eventually tossed because it looked a little too fake; the last one was just a rough stab at something like the Graphical Player cover (i.e. a colored background with the player pulled out of his original setting).

Then we found what we were looking for. Great pose, no goofy face, just a classic David Wright at-the-bat shot. Brad took the original photo, applied a little bit of Photoshop magic, and boom, there was our cover (click to embiggen): 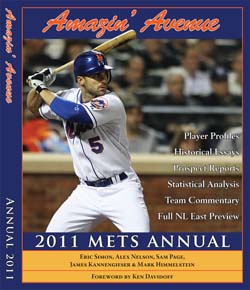 Swanky, right? So we were all set and could move on to more pressing things like writing the book and stuff. Except that we weren't all set, because the photo we found was from Getty Images, whose catalog we license for web use across SB Nation but for which we have no print license. Not to worry, I fired off a note to our brilliant and tireless legal counsel, Lauren, to get a price quote for one Getty photo to use in our minuscule print run. She got back to me promptly, and the quote we received from Getty, including a 25% discount for the small print run size, was $664. One photo, very few printed copies, six-hundred and sixty four big ones. This isn't a 10,000-copy run of the Sporting News annual we're talking about.

And that's where we are right now. We're looking into other options, and I'm going to reach out to Getty to plead our case, but the cover we all want may never be used because with our tiny operating budget we can't really justify the ludicrous licensing cost. We'll keep you posted as we move along, but right now this is impenetrably frustrating.