The 2010 Mets on the Basepaths

Share All sharing options for: The 2010 Mets on the Basepaths

Continuing a long string of stealing others' work, we'll take some excellent work done on the Dock of the Rays this week. Using Baseball-Reference.com, Jason Hanselman broke down how often teams went from first to third on singles, how often they scored on doubles, and how often they were thrown out trying to advance. It's an excellent look at bases gained and lost on the basepaths.

The short of it is that the Mets were the fourth-best team in the National League at taking the extra base, but the numbers are a little more interesting once you delve into the components.

The link to the full-size representation of Hanselman's work is here, but a truncated version will fit here, so I've pasted it below. It's a little hard to read, but basically the percentages represent how often the team took third (1stS) or scored from second (2ndS) on a single, and how often they went to third or home from first on a double (1stD). For example, when the baserunner goes to third on a single, he 'gains' a base for the team, when he gets thrown out trying to do so, he 'loses' a base. As you can see, the Mets were the fourth-best team in the National League on the basepaths. 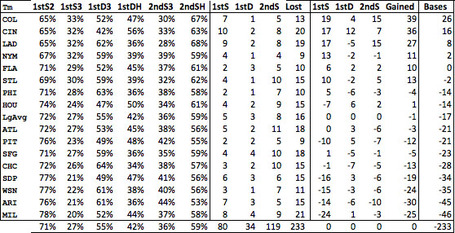 The really interesting part in this case, though, is not the overall total but the components. As you can see, the Mets were among the best in the league at taking third on a single, which bodes well for their team speed. Sort the leaderboards at FanGraphs for Bill James' four-component Speed Score, and you'll see that the Mets are the second-fastest team the National League by that measure. Look on the field, and you'll see speedsters like Jose Reyes and Angel Pagan and young dudes at the more lumbering positions - it looks like a fast team, too.

But for a fast team, they sure were conservative when it came to trying to score from second on a single or from first on a double, to the point that they functioned at a below-average level in those situations. Compare their work to the Rays - the fastest team in the majors by Speed Score, and the best base-running team in the American League by this measure - and you see that even though the Rays were thrown out ten times at home when trying to score from second on a single, their aggressiveness also led to five 'extra' bases in those same situations, mitigating the loss of those runs. Overall, they gained 12 bases in situations where someone took home as the 'extra' base. The Mets lost three bases in those situations.

This looks like it might need a followup in the Mets' situation, but it certainly looks like the Mets were conservative with sending runners home. Seen through the prism of this analysis, that cost the team a little on the basepaths. In aggregate, that means it cost the team runs as well.