Share All sharing options for: The Brief, Wondrous Baseball Life of Benny Agbayani 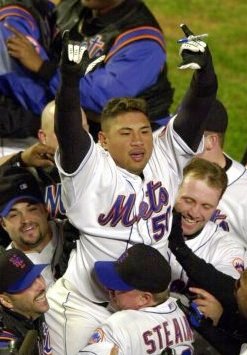 Yesterday marked the 39th birthday of Benny Agbayani, the former Met outfielder who rose to fame in the playoff years of 1999-2000 and came back to earth shortly thereafter. Benny is one of my all-time favorite Mets, and I know many fans of my relative generation (and beyond) feel the same way.

I make no argument that he was one of the best players ever, or even one of the best Mets ever, because I'm not insane. He was simply a guy it was impossible not to root for. So, at the risk of repeating some of the sentiments I expressed on my own site a while ago, I'd like to take a few moments to celebrate the awesomeness that was/is Benny Agbayani.

In my mind, Benny was a Mets fixture for several years. Perhaps it's all the time I've spent poring over the 1999 and 2000 seasons, but I feel like he patrolled the Shea outfield for many seasons. When AA site-meister Eric Simon pointed out that Benny has the eighth-highest OPS of any Met with at least 1,000 PAs (.833, just ahead of folks like Cliff Floyd and his former teammate Robin Ventura), I was not as shocked by this as I probably should have been.

But in truth, Agbayani was with the Mets for only one full season (2000) and portions of three others. The fact that he endeared himself to Mets fans so much during such a relatively brief stint says a lot about him--and us, too.

I'm sure Benny Agbayani was athletic, but he was not athletic in appearance. He had a big, round baby face, and wore a baggy uniform, presumably to mask his considerable bulk. He was not slow, but he looked slow when you saw him lumber around the bases, or lunge desperately for a dying fly ball.

This, more than anything else, endeared him to Mets fans. In his way, he looked like an ordinary schmoe, but somehow he was a major leaguer. Of course, you don't make it to the majors in this day and age without being a world class athlete; even the 25th man on the roster is more talented than 99 percent of the population. Even so, Benny appeared to be fully aware of how he was perceived, and thus enjoyed every moment he spent on a baseball diamond.

Perhaps that's because he did not enjoy an easy trip to the majors. His career is dotted by many dizzying highs and terrifying lows, with very few creamy middles. He was drafted by the Mets in 1993 and languished in their farm system for several years. He got desperate enough to go to spring training as a replacement player in 1995, which earned him a permanent ban from MLBPA membership. (Correct me if I'm wrong, but I don't remember this earning him the same amount of ire as other replacement players, particularly his former teammate Rick Reed.)

Benny's first stroke of luck occurred when Bobby Valentine became manager of the triple-A Tides. Thanks to their time together in the salt mines of Norfolk, Valentine grew to be one of Benny's (very) few champions in the organization, and the manager was finally able to bring Agbayani with him to the majors midway through the 1998 season. Unfortunately, Benny only logged 16 plate appearances before being sent back down.

He might have remained in the minors in 1999 were it not for the complete and utter uselessness of the reacquired Bobby Bonilla, and an injury bug that went around the rest of the Mets' outfield corps that spring. Agbayani was called up again and soon forced his way into the starting lineup. He hit an astonishing 10 home runs in his first 73 at bats, and 11 before the All Star break, still the second-highest tally for any Mets rookie (now tied with Ike Davis). His success stunned him as much as anyone else. "It's never happened to me in my whole life, the fans being behind me the way they are," he told the Daily News in the midst of his hot streak. "I just hope that when I'm not doing as well they keep cheering me on."

A cooling off was inevitable, and Benny followed his torrid home run pace with a sustained long ball drought (160 at bats). His regression to the mean, and the acquisition of Darryl Hamilton at the trade deadline, relegated him to part-time status as the regular season drew to a close, but he reemerged in the playoffs (once the Mets finally earned their way in).

With Mike Piazza sidelined with a thumb injury during the last two games of the NLDS against Arizona, Benny batted cleanup in his place and came up big. He contributed two hits and a run scored in game 3, and hit a huge RBI double in the sixth inning of the decisive game 4. (It could've led to the winning run, were it not for Armando Benitez's unclutchitude.) 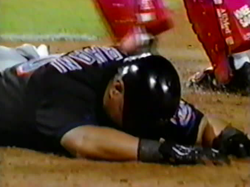 He had less impact in the NLCS, with only one hit, but that was a single to lead off the top of the eighth in game 6, and he eventually came around to score the run that put the Mets ahead for the first time in that insane game. When John Franco allowed the Braves to tie things up in the bottom half, he came through again with a leadoff walk against John Rocker in the top of the tenth, then scored on a Todd Pratt sac fly to give the Mets a 9-8 lead. Once again, the bullpen sprung a leak, and soon Kenny Rogers...well, let's not discuss that right now.

Despite his solid year, Agbayani's job was once again in jeopardy to begin the 2000 season. He was widely regarded as the odd man out when the Mets would need a fifth starter, until his grand slam in the top of the tenth sent the Mets home with a split of the two-game series against the Cubs in Japan. He followed this with another good season in the Mets' revolving door outfield, belting 15 homers and driving in 60 runs in 119 games. It was during this season he had some of his most memorable major league moments. The first came when he accidentally gave away a ball in play to a young fan (he thought it was the third out). The Mets won the game anyway, and the mental error--which would have been unforgivable for almost any other player--instead made him more endearing to fans.

The second came when he hit the walkoff home run in the bottom of the 13th of the pivotal game 3 of the NLDS against the Giants, one of the most thrilling moments in Mets history, and maybe the best game I've ever been to. It was during this game that I first felt Shea Stadium literally rock and sway with excitement. 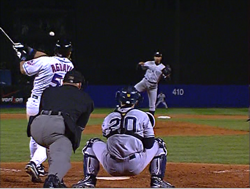 Benny followed these heroics by batting .353 against the Cardinals in the NLCS, and knocked in the winning run in game 3 of the World Series against the Yankees, which both extended his own postseason hitting streak (12 games stretching back to 1999) and ended El Duque's unbeaten streak in October. (This time, Benitez made it stand up.) Unfortunately, he was also goaded by Howard Stern into making a prediction for the series. He guessed the right number of games--5--but not the victor.

And just like that, it all seemed to vanish. Thanks to injuries, Benny appeared in only 91 games in 2001 and saw his home run total dwindle to just 6. He became expendable during the subsequent offseason when GM Steve Phillips tried to trade his way back into contention. Agbayani went to Colorado as part of the complicated three-way deal with the Brewers and Rockies that brought Jeromy Burnitz back to Queens in January 2002.

Benny seemed to be one of those rare players who wilts outside of the spotlight. He put up middling numbers in Colorado and Boston in 2002 and could not crack the majors thereafter. But he did log several successful years in Japan for the Chiba Lotte Marines, managed by the man who gave him his first real shot, Bobby Valentine. He was with the Marines in 2005 when they ended a 31-year championship drought. One month later, the team won the Asia Series (a tournament between league champs of Japan, Korea, Taiwai, and China), and Agbayani walked away with the series' MVP honors.

Benny was just as popular in Japan as he was in New York, if this video is any indication. Japanese baseball fans often have choreographed chants for their favorite players, much like European soccer fans do, and Benny earned this tribute.

Benny retired from the NPB after the 2009 season. He's now an educational assistant at Mililani High School in Oahu. "The kids ask me, 'Why are you doing this? Didn't you make enough money?'," he told the Daily News last April. "I tell them I had the opportunity to have such a great life. Maybe I can guide them in the right direction, explain their options after high school. It might not be professional baseball, but something."

In a way, Benny's brief time at the top encapsulates much of what it means to be a fan of this team. The fact that he made it to the majors in the first place was a small miracle. That he also contributed to some of the greatest moments in team history--well, how else could this script end? Someone like him, who packed so many heroics into so little a period, on some of the biggest stages in the game, could only be a Met.