After debuting the original AAOP last year, I'm back with a new plan. Think I'm out of my mind here? Remember the only Mets blogger pushing for Kelly Johnson, R.A. Dickey, and Carl Pavano last offseason. Anyway, here's my squadron, consisting mostly of players I've watched play for the Nashville Sounds: 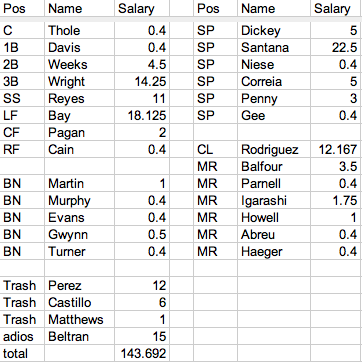 Here's the crux of my plan. I know it says "Haeger" on the roster, but he just signed with the Mariners and I'm not changing it. Being a knuckleball pitcher is like being a Jedi, you have to learn from a master. With Zink a minor league free agent, we may have a suitable apprentice for Dickey.