Share All sharing options for: Every Pitch Counts: Mike Pelfrey

My AA colleagues pointed out that a few other team sites did some analysis of pitchers' tendencies based on pitch count, like this one at Blue Jays-centric site Ghostrunner on First. And since imitation is the sincerest form of plagiarism, I thought I'd give it whirl for the Mets' starters and see what the data had to say about them. First up, Mike Pelfrey.

Pelfrey began the 2010 season like a house on fire, but with significantly less screaming. At the end of June, he was 10-2, and when he wasn't selected for the All-Star game, it seemed a snub to some. Then he struggled through a miserable July, with an ERA of 10.02 and a 2.66 WHIP, while opponents batted an astonishing .496 against him.

His stats improved somewhat for the remainder of the year--there's almost no way they could've gotten worse unless he suddenly morphed into Oliver Perez--but the consensus seemed to be that his season was, in aggregate, a disappointment. Mostly because his mid-summer swoon indicated he hadn't turned a corner as many thought, but was still prone to inexplicable lapses in judgment and control.

Did Pelfrey's pitch selection have anything to do with his sudden fall from grace? Here's his overall percentages for pitch-by-pitch-count over the course of the season. (Based on pitch count data taken from the pitch/fx pages at Texas Leaguers) 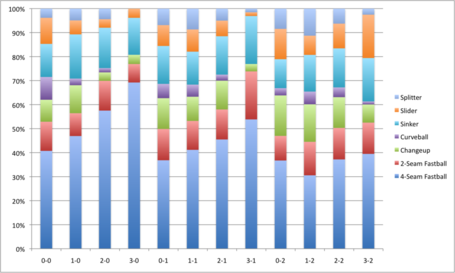 As you can see, Big Pelf loved his 4-seam fastball. Behind, ahead, or neutral, he likes throw the heat. Only in the favorable count of 1-2 did a batter's chance to seeing a 4-seamer drop as low as 31 percent. In fact, if you add in the 2-seamer, there were only two kinds of counts where a batter had a less than 50 percent chance of seeing some kind of fastball, and both were pitcher's counts (0-2 and 1-2). The only pitch Pelfrey threw as consistently was his sinker, which hovered around 15 percent in most counts and rose as high as 20 percent on 3-1 counts.

Pelfrey's curveball made a reappearance this year, after reportedly being suppressed by Rick Peterson. But as the chart shows, Pelfrey was not confident enough in this pitch to throw it when behind in the count. The same could be said of his changeup; though he threw this pitch more frequently than the curve, its use diminished whenever Pelfrey fell into a pressure situation.

It's not too surprising that a pitcher who relied so much on his fastball, and who was so reluctant to use his secondary pitches, would see his luck catch up with him at some point. But was there any difference in the pitch selections Pelfrey made in July as opposed to the rest of the season? 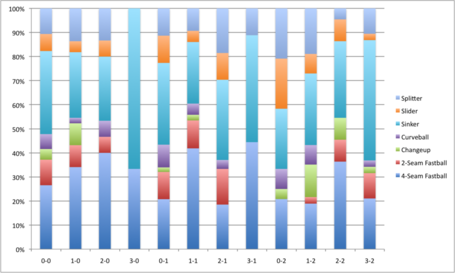 This is skewed by a much smaller sample size, of course. But it indicates that, if anything, Pelfrey used his four-seam fastball less frequently in July than he did on average throughout the season. He also did not throw as many two-seamers, and his use of the sinker in all counts increased dramatically. In other words, my Too Many Fastballs theory doesn't hold much water.

I thought maybe Pelfrey fell behind hitters more often in July than he had at the beginning of the year, but that doesn't appear to be the case. Eliminating 0-0 counts, Pelfrey threw pitches in hitter's counts 40 percent of the time during July, which was only slightly higher than his rate from April through June (38 percent). Perhaps falling behind in the count so often caught up with him. If so, it doesn't explain his decent August and September, when he was only slightly better at avoiding hitter's counts (36 percent).

My best guess to explain Pelfrey's slide in July is he might have begun relying on his sinker more than he should have. And since a sinker is meant to be put in play, perhaps he just got unlucky and saw more balls elude gloves. His BABIP of .466 that month might lead you to that conclusion. But since most of his other stats indicate an inability to get anyone out (see: .496 opponents' batting average), it's hard to lay the blame on bad defense or bad luck.

Perhaps Pelfrey could concentrate this offseason on developing his curveball and changeup further, which batters whiffed on 9.5 and 11 percent of the time, respectively, as opposed to the 5.5 percent whiff rate his fastball engendered. (Granted, the curve and change whiff rates may have resulted from the relatively sparing use, and also because they were most frequently used in pitcher's counts.)

Or perhaps this year was just another hiccup in a young, still developing pitcher's career. I'm not sure there's a metric for that yet.