Who Is Ronny Paulino?

Share All sharing options for: Who Is Ronny Paulino?

Career
Ronny Paulino was signed by the Pittsburgh Pirates as an amateur free agent out of the Dominican Republic in 1997. The Royals picked him up briefly through the Rule 5 draft but returned him to the Pirates.

Paulino made his debut with the Pirates at the very end of the 2005 season and remained in the organization through the 2008. His rookie campaign was impressive, but it was heavily fueled by a high batting average on balls in play. Once his luck started to even out, Paulino’s overall numbers took a nose dive. By 2008, the Pirates expressed concerns about his conditioning and work ethic and sent him to the minors. They then gave up on him, and he was traded to the Phillies, Giants and Marlins during the winter of 2008-2009. He stuck with the Marlins, playing there for the 2009 and 2010 seasons.

In 2010, Paulino was suspended for 50 games by Major League Baseball after testing positive for a banned performance-enhancing drug. Paulino did not challenge the suspension, claiming the substance for which he was banned was an ingredient in the diet pills he was taking to control his weight. As a result of the suspension, he will miss the first 8 games of the 2011 season.

Splits
The most useful thing about Paulino seems to be his ability to hit left-handed pitching. In his career, he’s hit .338/.390/.491 a .382 wOBA against lefties. Against right-handed pitchers, though, Paulino has been pretty awful. Here’s a look at his wOBA splits from 2006-2010. 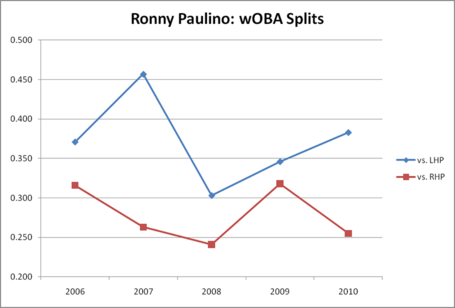 It should be noted that during the 2008 season Paulino saw very little time in the majors, so take those numbers with the requisite "small sample size" grain of salt. Overall, despite his general offensive decline, Paulino maintained the ability to hit quite well against left-handed pitchers. In other words, his gaudy career numbers are not solely supported by his early seasons. Unfortunately, Paulino’s numbers vs. right-handed pitchers have been atrocious throughout his career.

Mets History
Mets fans might be familiar with Paulino’s name because he has been mentioned as a possible acquisition for the Mets numerous times in the past. In his limited time playing against the Mets, Paulino didn’t do anything particularly memorable, posting a .300/.341/.325 line in 44 plate appearances. Of his twelve hits against the Mets, only one, a lone double, went for extra bases. Paulino wasn’t with the Marlins when they became a major thorn in the Mets side in 2007 and 2008.

Conclusion
If the Mets head into the season with Josh Thole as the starter and Ronny Paulino as the backup, a scenario that appears quite likely, they’ve got the ingredients for a platoon behind the plate. As Eric mentioned earlier, the addition of Paulino should not relegate Thole to a strict platoon, as avoiding southpaws altogether could hinder his development as a hitter.