The Mets drafted Pete Schourek in the second round of the 1987 draft out of Marshall High School in Virginia. Schourek’s principal asset as an 18-year-old was his height; his lanky, six-foot-five frame offered lots in the way of projection, and his sinking fastball was already sitting in the high 80s. It didn’t require much imagination to see Schourek eventually sitting in the low 90s, plus velocity for a southpaw. The other big point in Schourek’s favor was that he already had a very good breaking ball, a hammer curve that could bend knees. He needed a changeup, but that’s really not uncommon for young high school arms.

The Mets quickly signed Pistol Pete and sent him to Kingsport to close out 1987. He made 12 starts and pitched just okay: his strikeout rate was okay, his walk rate was okay. He wasn’t a world beater, but he held his own, and the Mets were prepared to give him a taste of full-season ball in 1988. But Schourek’s elbow had other ideas, and Tommy John surgery kept him out for the entirety of the season.

Schourek’s 1989 suddenly become a season of paramount importance. He had lost a year of development, and nobody knew what to expect from his arm as it recovered. He played a whole season for Columbia in the South Atlantic League, and the results were generally positive. His ERA was well above the league average, and his strikeout rate was much stronger than it had been at Kingsport, increasing from 6.5 to 8.7 per nine innings. He was walking a batter every two innings, but, coming off a major arm surgery, it was a strong showing. The Mets rewarded his performance with a promotion to St. Lucie late in the season.

And in 1990 Schourek had a breakout. He started in St. Lucie and made five starts, posting a 0.97 ERA while walking just eight in 37 innings. The Mets aggressively promoted Schourek and sent him to Double-A Jackson, where he continued his strong pitching in the Texas League, posting a 3.02 ERA over 19 starts. The walk rate was still strong at 2.8 per nine innings, and he did a good job of keeping the ball in the park. Like the season before, the Mets promoted Schourek just before season’s end, sending him to Triple-A Tidewater to make his final two starts. All-in-all, Schourek went 16–5 with a 2.57 ERA over 175 innings across three levels. While the strikeout rates fell to pedestrian levels and his velocity never really broke 90, Schourek was looking like a very good finesse prospect. Baseball America named Schourek the Mets’ second-best prospect behind flamethrower Anthony Young and the number 33 prospect in baseball. 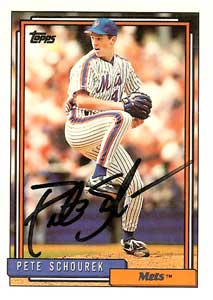 Mets manager Bud Harrelson shocked everyone when he told the press that the 22-year-old Schourek had made the 1991 Mets’ staff out of spring training. The spot in the bullpen opened when Sid Fernandez fractured his arm, forcing the team to move reliever Wally Whitehurst into the starting rotation. It was a puzzling move. Schourek was a promising starting pitching prospect. He needed regular work, and he wasn’t going to get that in the back of a major league bullpen. And he struggled, predictably posting a 5.32 ERA before being demoted at the end of May. He made a couple starts in Tidewater, pitching well before the Mets recalled him after injuries ravaged their pitching staff. He mostly stayed in the bullpen, but was inserted into the rotation at the end of August. He pitched better there, going 3–1 with a 4.15 ERA over his final six starts, the highlight being a one-hit shutout against the Expos. On the whole, this was the Mets’ first misstep with Schourek, resulting in a lost year pitching in an unfamiliar role that was neither his past nor his future.

In 1992, new manager Jeff Torborg sent Schourek to Tidewater where he pitched well over his first eight starts. He was promoted and posted a solid 3.64 ERA over 21 starts and a relief appearance. This was how the Mets should have treated Schourek in 1991. There was a warning sign, however: his strikeout rate was a pitiful 4.0 per nine innings. But the walk rate was under 3.0 per nine innings, and he kept the ball inside the park. Whatever the strikeout rate, it was a step forward for Schourek, and it looked like he might pull a Mary Tyler Moore and make it after all.

That is until Dallas Green happened. Torborg was fired early in 1993, and the Mets replaced him with Green, who was instructed to light a fire under the mostly veteran team. The problem was Schourek wasn’t a veteran and shouldn’t have been treated like one. He got off to a rocky start, and when Green took over, he immediately yanked him from the starting rotation, which didn’t please the 24-year-old lefty. Green took notice of Schourek’s attitude and spent the season using him as his personal yo-yo, yanking him between the rotation and the bullpen. When Schourek pitched poorly, Green would publicly bash him to the press. After one September relief appearance, Green yanked Schourek after one inning in a blowout, telling reporters afterward, "I’ll give him to you for Christmas if you want."

Although both men claimed to be ready to bury the hatchet the next spring, neither one made much of an effort, and the two barely spoke. And while Green claimed to be willing to accept Schourek on the team, he insisted the kid be demoted during the first week of the season—Schourek didn’t even pitch—in favor of the forgettable Doug Linton. Out of options, the Mets had to expose Schourek to the waiver wire, a move general manager Joe McIlvaine called a gamble. Reds GM Jim Bowden immediately made a claim and looked like a genius. He pitched fairly well for the Reds in 1994 before finishing second to Greg Maddux in the 1995 NL Cy Young race.

It’s well known that Schourek was never as good again. But Schourek’s 18–7 1995 did not have many of the qualities of a fluke season. He had phenomenal control, an above average strikeout rate, and an above average ground ball rate. His FIP that season was nearly as good as his ERA. The real problem was that he was never completely healthy after. His pitching elbow would undergo three more surgeries before his career ended in 2001, the first of those coming in July 1996. Schourek bounced around for a while afterward, and he’d occasionally be quite effective, as with Boston in 2000.

Getting back to the Mets, where did they go wrong with Schourek? In general, they showed a complete lack of patience. Young pitchers need two things: regular innings and time. The move to the bullpen in 1991 cost him the former, and the team rarely seemed willing to ride out the rocky points in Schourek’s career. This is sometimes excusable. Schourek’s strikeout rates were concerning, and not every team can wait for a pitcher to develop at the major league level. But the 1991–1993 Mets were not one of those teams, losing an average of 92 games a season.

And Dallas Green was just an unfortunate choice to manage those mid-90s teams. They started out as a veteran team, but they needed to transition into a developing one, and Green’s refusal to accept talented kids like Jeromy Burnitz and Schourek—not to mention his abuse of young pitchers’ arms—contributed to the team’s woes over the next few seasons.