This'll be the first recap of the spring, as we need to get accustomed to banging these out six days a week (and sometimes seven).

Despite the original association of Saint Patrick with the color blue, the Red Sox and Mets were decked out in green today: the former in green jerseys and the latter in chapeaux verts. I wore a green shirt to work and ate a big salad with dinner. Honorary Irishman!

Mike Pelfrey was stretched to four innings, allowing four hits and a run while walking none and striking out two. His sinker was a nonentity, generating just four ground balls to six fly balls (and another four liners). His control was terrific, though, nailing the strike zone on 43 of 58 pitches (74%).

Jenrry Mejia needed just six pitches to dispatch Mike Cameron (grounder to third), Josh Reddick (liner to first), and Marco Scutaro (grounder to short). Kiko Calero made his second spring appearance after Mejia's exit, and worked around a Ruben Tejada error at second to face the minimum in the sixth.

Elmer Dessens likewise faced just three batters in the seventh, getting David Ortiz (first) and Adrian Beltre (second) on ground balls and Jeremy Hermida on a fliner to left. Tobi Stoner allowed a run on three hits over the final two innings, but did get five ground outs to just two in the air.

The Mets didn't manage much offensively, collecting just three hits through the first seven innings. Frank Catalanotto led off the eighth inning against Ramon Ramirez, who followed up that initial fit of ill control by walking the next batter, Chris Carter, too. Fernando Martinez showed everybody what's what by striding to the plate and depositing a Ramirez offering over the right-center field wall to give the Mets a 4-2 lead and, eventually, a win by the same margin.

The WPA graph for your viewing pleasure, courtesy of FanGraphs. 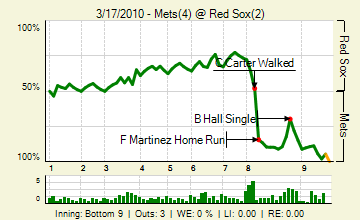