In a very tangible way, the success of the Buffalo Bisons this season is as consequential to the health of the Mets franchise as anything the parent club does. After the way this offseason played out, the Mets have clearly staked their future on the development of one class of prospects, which includes Fernando Martinez, Ike Davis, Jenrry Mejia, and Ruben Tejada. Mejia will likely start the year in AA and his timetable to the majors will depend entirely on the speed of his development relative to his innings count. Since he could feasibly get called up as a setup man for the competitive Mets in September or a starter for the sunk Mets in that same month, no one in particular is blocking Mejia's inevitable ascent. Also, such is the nature of the pitching staff that Oliver Perez, maybe the 15th best pitcher in the organization, claims the third spot on the depth chart.

By contrast, all of the pressing hitting prospects have obvious stopgap players manning their respective positions with the big league club. Josh Thole will eventually supplant Rod Barajas, either sometime this year or in 2011. His relationship with Barajas is more mentor-mentee. The other aforementioned Bisons, though, came to camp to kill. Ruben Tejada, behind the emergency glass for both Jose Reyes's hammy and Luis Castillo's knees, is 6-for-17 with two walks. Ike Davis and Fernando Martinez are both 10-17. Davis hit a 900-foot grand slam and Fernando has already hit two homers and two triples. As a result, fans have begun wondering aloud whether these exciting young players should go ahead and break camp ahead of their major league placeholders.

Luckily, we have projections to help answer this question, so we don't have to default to 17 at-bats versus some guys the Nationals and Braves are going to cut. CHONE has projections for all six players in question. Keep in mind, CHONE is typically conservative in projecting both major and minor leaguers, which is fine, since everything here is relative to other projections.

The first column is projected weight-on-base-average for each player, the second is runs above average based on that wOBA over 600 plate appearances, and the third is some fielding projections I ballparked. Obviously, with more reliable fielding data available for major leaguers, projecting them is easier. The minor league projections are just conservative ballpark estimates based on scouting reports and position changes. Most importantly, all of those fielding numbers are estimates relative to their major or minor league counterpart. For instance, Ruben Tejada, an above-average shortstop moving to second base, would likely be about 20 runs better than Luis Castillo, the worst defensive shortstop in the majors. Put more graphically: 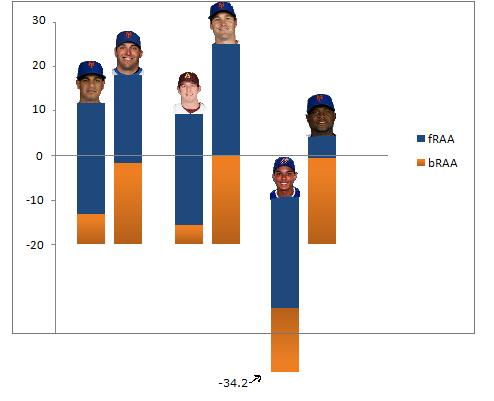 The main takeaway here is that only Fernando seems particularly close to overtaking his stopgap. One could argue that given such a slim difference between the two (7 runs or <1 WAR), the team should go with the player presenting the most upside. One could also argue, however, that in the short term, their upside and downside are about equal. Hopefully, these columns start to meet sometime during the season, and not because Murphy's and Francoeur's have shrunk.