D.J. Dozier took a circuitous route to stardom in the major leagues. His story begins at Virginia Beach, where he was a two-sport star at Kempsville High School. He was a well-regarded prospect in both baseball and football. The Detroit Tigers drafted him in the 18th round of the 1983 amateur draft but couldn’t entice the young outfielder to sign in lieu of a scholarship to play football for the Penn State Nittany Lions. At Penn State, he excelled as a star running back, becoming the first back in school history to lead the team in rushing four straight years. Among his other Penn State highlights: sharing a Sports Illustrated cover in 1985 and scoring the winning touchdown in Penn State’s Fiesta Bowl victory for the National Championship in 1987. The Minnesota Vikings were so impressed that they made Dozier the 12th pick overall in the 1987 draft. 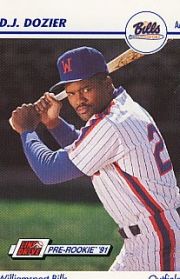 Little known fact: D.J. Dozier is the only man who could have prevented the Dallas Cowboys’ emergence in the 1990s. Dozier’s football career didn’t go as planned, right from the start. He had trouble staying healthy and often found himself on the bench, a situation that forced the Vikings to trade away every one of their draft picks over the next twenty years for running back Herschel Walker. I think it’s safe to say that if the Vikings had been happy with Dozier’s production, the Walker trade would never have been a necessity. In four years with the Vikings, Dozier managed just 643 yards, and eventually he got restless. He wanted to play and didn’t particularly care what sport he’d be playing. He announced his interest in essentially becoming the next Bo Jackson, playing baseball during football’s offseason.

After weighing his offers, he decided to sign with the Mets after a seven-year absence from the game. The Mets were the closest thing Dozier had to a hometown team; the Orioles were geographically the closest, but the Tides were just a stone’s throw from Virginia Beach, and Dozier would get a chance to play in front of his friends and family on a regular basis. But first, baseball’s prodigal son was sent to St. Lucie—an aggressive assignment for a guy who hadn’t really played since high school.

And he lit the Florida State League on fire. He batted .297 for St. Lucie, adding a .383 OBA, a .473 SLG, and 33 steals. Pitchers walked away black-and-blue, refusing to walk back out to the mound when Dozier was due up. Eventually, the Mets had no choice but to promote him to Double-A Jackson of the Texas League,before his reputation had a chance to precede him. And what did Dozier do? He batted .324/.395/.569 in 102 at-bats, knocking a staggering seven triples.

From the moment he signed, he was instantly the best athlete in the organization. Dozier stood a solid six feet, 200 pounds. He was arguably the fastest guy in the organization, and he had a lot of natural strength. He had a pretty awesome mustache thing going. Baseball America named Dozier the #44 prospect in baseball, substantial praise for the young running back.

The Mets were believers in D.J. Dozier, too. Vice President and player development guru Gerry Hunsicker:

"I think he surprised everyone, maybe even himself, with how quickly he got back in the groove. I'd have expected he'd have at least one prolonged slump, a genuine struggle of one kind or another. He never did."

But Dozier was confused. Was he a football player or a baseball player? He had been declared a conditional free agent after requesting a trade to remove himself from Herschel Walker’s shadow, so he technically wasn’t under contract with the Vikings as the 1990 season opened, and a contract dispute kept him off the field until midseason. But Dozier returned to the Mets in February, participating in his first spring training.

He moved to the Eastern League, playing for Williamsport, where he put up another solid line, .278/.373/.459 with 25 steals in 74 games. With every passing day, Dozier’s football career became less of a concern. The New York Times reported:

"I can't really speculate as to what can happen or what will happen," Dozier told The Williamsport Sun Gazette. "The best thing I can do is take it a day at a time and play the cards that I have in hand. Right now I'm playing baseball."

The Mets moved him up to Tidewater, where his production slipped a little. Dozier, again embroiled in a contract dispute with the Vikings, joined the Mets’ instructional team after the minor league season, but his agent soon advised him to quit, else he’d risk an injury and scare off potential suitors. 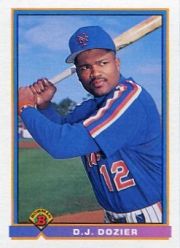 Once he returned to the Mets, he began the season at Tidewater but was quickly called up to make his major league debut once Vince Coleman went down with a rib injury. On May 6, he got his first at-bat, a pinch hitting appearance against the Reds’ Greg Swindell in the seventh inning. Dozier hit a grounder to short, but Freddie Benavides was so intimidated by Dozier’s speed that he made a bad throw. Dozier came around to score on a Dave Magadan single. Dozier got his first start the next day, in left field. He didn’t get a hit, but he walked and stole his first career base.

By the end of the month, Coleman was ready to return, and the Mets weren’t quite ready to recognize Dozier’s greatness after he hit .200. They sent him back to Virginia, where he endured a bit of a rough season, batting just .234. Still, the Mets gave Dozier a September call-up, where he received eight more starts and batted .185/.233/.259. Apparently, the Mets were expecting the world out of the 26-year-old, and waved the white flag.

Dozier was traded twice in once calendar year. First, the Vikings finally acquiesced to Dozier’s demands to go to a team where he wouldn’t be stuck behind Herschel Walker on the depth chart. They traded him to the Detroit Lions, where he got to sit behind Barry Sanders. If you’re going to sit, you might as well sit for the best. And the Mets shipped away Dozier, too, sending him along with Wally Whitehurst and Raul Casanova to the San Diego Padres for Tony Fernandez.

I’ve never received any kind of confirmation about this, but I strongly suspect Dozier, in a fit of anger, cursed the Mets on his way out the door. Fernandez, a lifetime .288 hitter, batted just .225 as a Met. The Mets lost 103 games, a drop-off of 13 games from 1992. Was Dozier responsible for that drop-off? I’ll leave it for the reader decide.

Dozier tried to stick it out in 1993, but his heart wasn’t in sports anymore. The Padres didn’t realize his brilliance, and they traded him to the Cardinals. After the season, Dozier retired from both football and baseball. From The Virginian-Pilot in January 1995:

"The Lord just . . . told me to put down the cleats," said Dozier, who at 29 is in his first year as athletic director at Rock Church’s Rock Academy. "He told me it was time to train for the ministry. It kind of hit me after the 1993 baseball season, when I was trying to work out to play winter ball."

Dozier spent the next five years as a missionary, including working for noted faith healer Benny Hinn, chiefly dealing with logistics. Dozier took this training and became a financial planner, even starting a business with former Phillies bust Tyler Green at one point. The pair provided sound financial advice to athletes looking to rejoin the real world.

Some might wonder why Dozier would appear as high as he does on this list. After all, he only played 25 games in the majors, and he hit .191/.264/.234 over those 25 games. Hell, he even had a .971 fielding percentage, dreadful by any measure. But take a look at his career WAR numbers:

The first column represents Dozier’s batting runs. Next are his fielding runs, based on TotalZone. The third column is a positional adjustment. "Grs" represents the runs Dozier added through grission, "Nam" the runs having a cool name contributes, and "ML" is a bonus Dozier receives for playing on both the Mets and Lions. That’s followed by an adjustment for replacement level, and RAR and WAR stand for runs and wins over replacement, respectively.

As you can see, Dozier’s value chiefly comes from his name. There’s almost a soft musicality to the name, as well as something of a mystery: Dozier’s given name is William Henry Dozier, Jr. Where did the D.J. come from? After years of research, I finally uncovered the true story. Dozier’s father was nicknamed Deke, so friends started calling his son and namesake, "Deke Jr." The name stuck in an abbreviated form.

So there you have it: Deke Dozier, Jr., history’s 31st greatest Met.