Share All sharing options for: Mets 1, Braves 0: Reign In Flushing 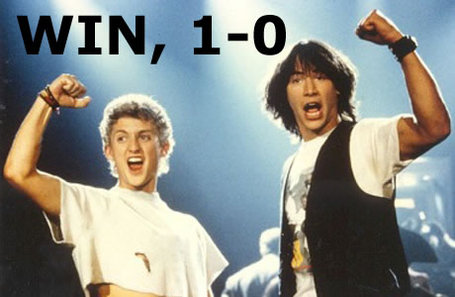 Mike Pelfrey wasn't at his best but managed to hold the Braves scoreless through five innings. Raul Valdes threw one pitch in the 6th before the game was delayed, and eventually called, due to rain. Credit those who made it out to the game tonight -- there may have been more comments in the AA gamethread than fans in attendance. To clarify, Pelfrey is not credited with a shutout and Valdes does not earn a save since he didn't get any outs. Thanks to Ken Davidoff for the info. Big Pelf struck out three, walked five and benefited from double plays by Jason "God" Heyward and Troy Glaus. It was a bad process, good results game for Pelfrey. I could go on a bit more about why the Mets' NL leading left-on-base % is likely unsustainable but for tonight I'll just enjoy the enjoyment.

Impressive Braves sophomore Tommy Hanson struck out eight Mets in five innings, allowing just one run when Jose Reyes scored in the 1st inning after a Chipper Jones throwing error. Luis Castillo had two hits and stole two bases but besides that Mets bats were quiet. David Wright continued to struggle, going 0-2 with a K. This series must have been excruciating to watch for Braves fans -- their favorite team made seven errors in the three games, hit into double plays at unopportune moments and generally played like little leaguers.

The national broadcasters leave a lot to be desired but Orel Hershiser playing foil to Joe Morgan has been entertaining. At one point Morgan started blabbering on about a non-existent baserunning rulebook, or something, and Hershiser responded: "Rulebook? What rulebook?". There were numerous other moments where Hershiser seemed to be giving Morgan the business. It's certainly a season subplot to monitor.

The Mets are now tied for 2nd place heading into a three-game set with the struggling Dodgers. With Manny Ramirez on the DL and Clayton Kershaw and Chad Billingsley not scheduled to pitch, it's a good chance to pick up some wins. Tomorrow's matchup is Oliver Perez vs. Hiroki Kuroda, at 7:10 on SNY/ESPN.

Pelfrey walks five, but not one comes in
While Reyes's legs are what give Mets the win
Though Jerry uses relievers ‘till all of them ache
Merciful rain came to give them a break 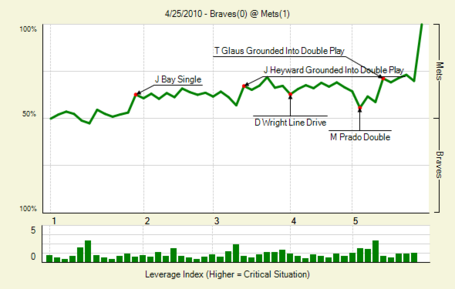