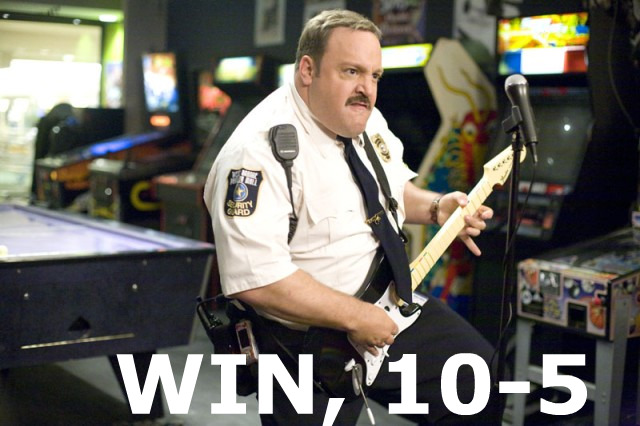 Good news or bad news first? The bad news is that Oliver Perez was terrible again, throwing just half of his pitches for strikes and failing to complete the fourth inning. Like the girlfriend that keeps cheating on you, the Mets keep sending Perez out there start after start, season after season, convinced that he will do something different and almost always failing to not disappoint. You tell yourself that he's a different man, he's figured something out, he's working on a splitter, and now he'll prop you up on his brawny shoulders and everything will be alright. Then as soon as you turn your back he's banging that guy with the Danzig tattoo who lives up the block. Same old story, same old Ollie. Fool me six times, shame on you. Fool me seven times, shame on me.

For better or worse, Jerry Manuel indicated after the game that he has no intention of removing Perez from the starting rotation at this point. I assume he's watching the same games as we are, but maybe those are magic emo glasses and he's seeing something totally different. It's probably not yet crucial to oust Perez, particularly because the Mets may also be in trouble with John Maine, whose grip on the rotation may be even more tenuous than Perez's. Still, a couple more (dozen) starts like this and the Mets may have to get Dillon Gee or Jenrry Mejia someone else up to the big club to help out with the rotation.

There are quite a few bits of good news. First, as it relates to the preceding thought, Hisanori Takahashi was pretty great tonight in relief of Perez, throwing 3.1 innings of relief and allowing just three baserunners (one walk, three hits) while striking out five. His pitch count was 75 when he finished the seventh, the most pitches he has thrown in a game this season. Takahashi has 21 strikeouts in 14.1 innings, though ten walks mean his overall peripheral rates aren't fantastic. Nevertheless, he has kept opposing hitters off balance with a mix of breaking balls, changeups, and high-eighties fastballs.

David Wright went 3-for-4 with the go-ahead RBI single in the fifth to give the Mets a 4-3 lead, and a bases-clearing triple an inning later to stretch the lead to 10-3. He also drew his 21st walk of the season and didn't strike out for the first time in a dozen games.

Jenrry Mejia was strategically used in the eighth inning with the Mets up 10-4. These mop-up appearances are so crucial to his development as a starter, no?

The Mets also swept a doubleheader from the Dodgers for only the second time in their history and the first time since 1971. The win pushes the Mets' record to 12-9, and losses by Florida and the Phillies leaves the Mets alone atop the NL East for the first time this season. They've won six games in a row and are 8-1 on their current homestand that wraps up with the finale against the Dodgers at 1pm on Wednesday.

If I can go back to Takahashi for just a moment. He entered the game in the top of the fourth after Perez walked Dodgers pitcher Charlie Haeger to load the bases. Takahashi walked Reed Johnson to bring home the tying run, and then worked the count full to James Loney before striking him out on an at-best borderline call. Here is that pitch freeze-framed. 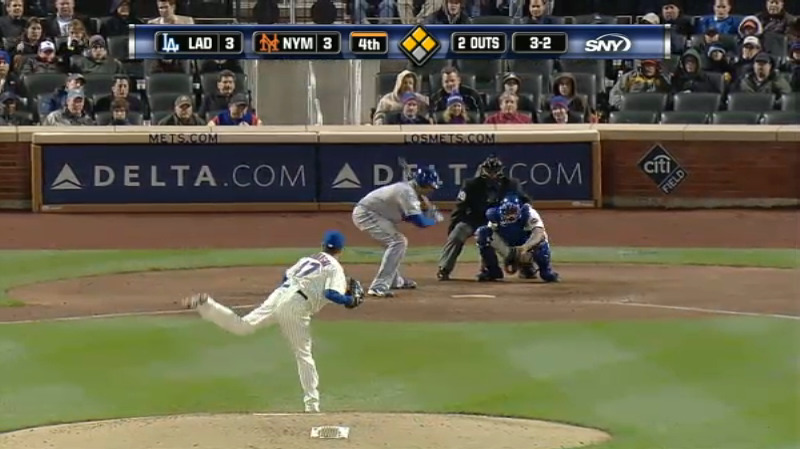 Pretty clearly not a strike. Here's the 2-2 pitch to Loney that was called a ball. 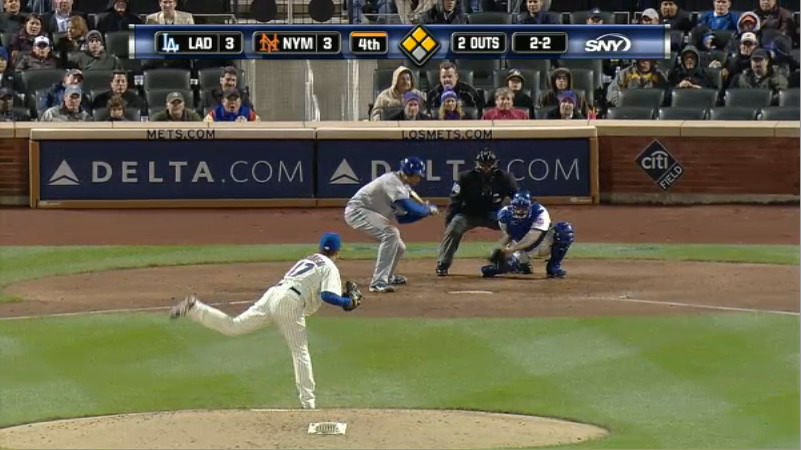 Also pretty clearly not a strike -- definitely low -- but probably a better pitch than the 3-2 offering. Both pitches were fastballs, and while Henry Blanco's mitt might have drifted a bit, they were still off the plate. Bad calls happen, and I'm always happy when they go the Mets' way, but it's also fair to objectively point out the evidence when the umpire blows one.

Perez with so many walks you could say
His outing was like a charity 5K
But Mets rallied back, Wright gave them the lead
And Davis’s double gives cushion they need
Then onto the sixth, with Dodgers in trouble
Mighty Wright clears bases with long booming double
And though Phils must lose, and game isn’t done
By morning, Met fans could say "We’re number one!" 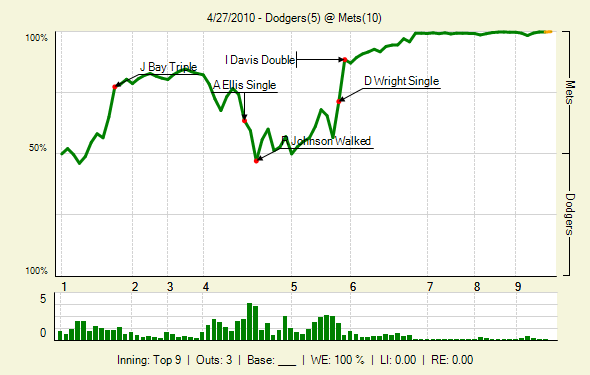