Share All sharing options for: Is Jeff Francoeur More Patient?

Among the weirder developments of the young season is Jeff Francoeur's double-digit walk total in April (surprisingly not the first or second time he's done that in his career). His to-date walk-rate doubles his career total and nearly triples last year's mark. And while that number likely represents a sample-size fluke, every walk seems like an event--a symbol of hope and a testament to the power of reform. Howard Johnson supposedly worked with him on "pitch recognition" this offseason; maybe he has changed. Or is he just leading us on?

Not surprisingly, O-swing has a strong negative correlation with BB%--it's hard to walk when you swing at all the balls. It's almost inconceivable, then, that Francoeur's supposed "breakout" in patience and lowest career K% coincides with his highest career O-Swing%. His high O-contact partly explains the incongruity, at least the low strikeouts. And while that may look like a sample-size fluke, his O-Contact has steadily increased every year since his rookie-season, from 44.6% in 2005 to 66.1% last season. This incredible bad-ball hitting has significantly shrunken the holes in his swing: 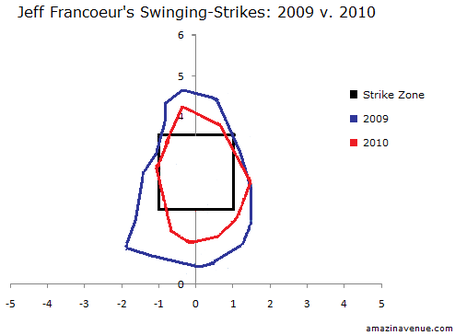 The red and blue shapes represent the boundaries of the areas where Frenchy consistently swung and missed--obvious outliers were excluded. This improvement could feasibly help him walk more. Walking isn't just about taking the most balls, it's about taking ball four. More foulballs means deeper counts and fewer swinging strikes means fewer pitcher's counts. Having a high O-Contact% and BB% aren't mutually exclusive, after all--Joe Mauer and Dustin Pedroia both had BB%>10 and O-Contact%>75 last year.

Those two players, however, did not swing at 40% of the balls they saw, or even anything close to that number. They are merely good at hitting the few balls they do swing at. Very few players can successfully maintain that high of an O-Swing and BB%. Players like Vladimir Guerrero and Pablo Sandoval come to mind, both of whom are known as prolific free-swingers. They're also both testaments to the axiom that strike-zone judgement is the ability to recognize where a pitch is relative to the strikezone, not what you do with the pitch after you've made the determination. Does Francoeur, however, have the skills to become a Guerrero-type hitter?

One consideration is the mechanical adjustments he's made since joining the Mets, which I discussed briefly last season. Consider the ridiculous picture at the top of this article, depicting the swing on Francoeur's clutch double from the other day. I doubt Francoeur makes contact with that pitch, a good foot off the plate, during his worst years on the Braves. Here's that swing broken down, and compared to a similar swing at a pitch not nearly as far off the plate from his disastrous '08. In both instances, the end-result was an opposite field hit.

There's some interesting contrasts here, besides his looking really skinny in a less-form-fitting Mets uni (pause). Starting with the result, in the Mets hit, Francoeur gets some of the barrel on a pitch way outside, without falling over or stumbling. By contrast, as a Brave, he reaches to nub a pitch on the outside-corner with the end of his bat, as he practically leans backward. In the two middle frames, while the ball is nearly in the catcher's mitt, his hands are at opposite positions. As a Met, his hands are driving toward the ball, whereas as a brave, he's just started moving them forward. I'm not a scout or hitting-expert, but focusing on those two frames demonstrates a pretty clear mechanical improvement:

Look how his knee is bent in the first frame. As a Brave, he was planting his foot in a pronounced leg-kick, then dragging his hands and hips through the zone to catch up with the pitch. His current swing is much more fluid--his hips and hands naturally drive forward across his leg. Weight is being transfered to generate power and stay balanced, not just to fling his bat through the zone.

Another positive sign is the possibility that he actually is recognizing pitches instead of guess-hitting. It's way to early to make determinations, but his performance so far against various pitches is encouraging.

Ultimately, it seems Jeff Francoeur is not becoming more patient--he's swinging at more balls and seeing fewer pitches per plate appearance. He may, however, be making strides in becoming a better Jeff Francoeur. With better pitch recognition--both in terms of location and type--he can take the pitches he knows he can't hit, while swinging at what he thinks he can. He's got the bat-speed and plate-coverage to decide to swing at anything in an instant.

Francoeur always spoke of walks in the past as a choice. It was easy to dismiss these statements at the time as the pontifications of the bad, proud player, but here was the guy who errantly claimed that OBP wasn't important enough to put on the scoreboard. Maybe--to a degree--Francoeur is simply choosing, or at least trying, to walk more. He's already walked once this year after being down 0-2, something he did exactly once in his four years with the Braves.

It's an absurd and unlikely scenario in which Francoeur can become this player who can decide to wildly hack at a pitch a foot off a plate and then display meticulous patience the next time up. Yet, such is the line all of the game's great bad ball hitters--Yogi, Ichiro, Vlad, and now Sandoval--have walked. It is perhaps the rarest and most entertaining skillset, fittingly belonging to the rarest talents and the most entertaining personalities. Francoeur certainly has both. Time will tell.