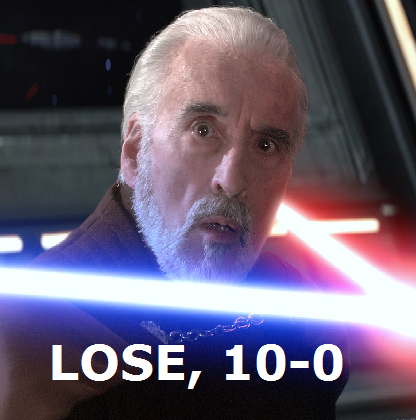 The game had the early makings of a pitchers' duel, with Mike Pelfrey and Roy Halladay trading zeroes for the first three innings. Things fell apart for Pelf in the 4th. He allowed seven runs and six hits in the frame, including a three-run homer to he-who-must-not-be-named. It wasn't entirely the big guy's fault, as Jose Reyes and Alex Cora each boofed tough-but-playable batted balls by Chase Utley and a transient-looking Jayson Werth, respectively. If Cora made his catch, it would have been a certain double play (or triple play?) and the situation would have likely been man on first, two outs and no runs in. Who knows how the inning, and game, would have turned out. Such is baseball. Pelfrey was due for a stinker so at least it happened on a day when the opposing pitcher threw a three-hit shutout.

My favorite moment of the game was Ike Davis's 4th inning plate appearance vs. Halladay. Here is the strike zone chart of the PA, from the catcher's point-of-view:

Ike worked an eight pitch walk and showed remarkable plate discipline for a player with his experience. He laid off pitches out of the strike zone and took cuts at strikes. The second pitch of the at-bat was clearly off the plate but called a strike. However, the first pitch was borderline and called a ball so let's deem it a wash. Ike joins Josh Willingham, Ian Desmond and Jason "God" Heyward as the only players to draw a walk vs. Halladay this season.

Kudos to Jerry Manuel for letting Raul Valdes work three mop-up innings. I thought he would burn four or five pitchers when Pelfrey exited after just four innings of work. Valdes was knocked around (five hits, four runs), but struck out six and induced an impressive 13 swinging strikes out of just 63 pitches. Club Tabasco from the Mexican League had to like that.

It was a disappointing day but the Mets have a great shot at taking two of three from the Philthies. Johan Santana faces Jamie Moyer tomorrow at 8:05 on ESPN.

A duel it was, excited we were
But Mets were Hamilton; Phillies were Burr 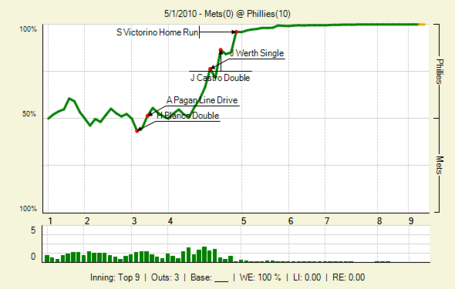