Nationals 3, Mets 2: Prohibition On Driving In Runners In Scoring Position

Share All sharing options for: Nationals 3, Mets 2: Prohibition On Driving In Runners In Scoring Position 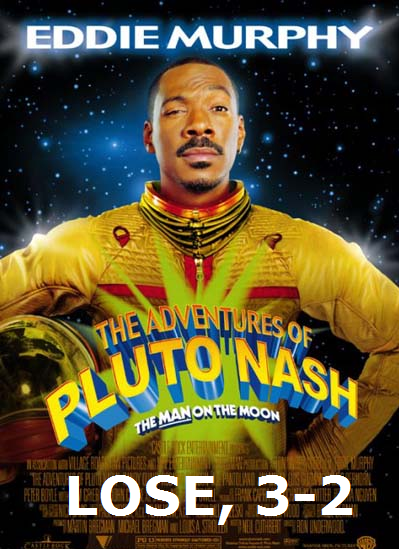 This one was tough to watch. Mets batters went 1-for-12 with runners in scoring position and struck out 11 times. That makes 25 strikeouts the last two games. Nats rookie Luis Atilano held the Mets scoreless through 5.1 innings of work, throwing no harder than 88 mph and averaging closer to 86. Add in a Jose Reyes tantrum/ejection and game length approaching three and a half hours and I wish I'd read a book or watched Seven Samurai instead.

David Wright has received the most attention for his struggles, but Jason Bay and Jeff Francoeur have been absolutely terrible. Bay is slugging just .385, a far cry from his career mark of .515. I'm not sure what the problem is. Prolonged cold streak? Injury? Not seeing the ball? It's tough to not be a little concerned. The mainstream media fell over itself this spring and early on this season in praise of gritty clubhouse savior Francoeur. What the MSM hasn't made a peep about his his .421 OPS in 85 plate appearances since April 17th. I will not make any sweeping statements or conclusions about Francoeur just yet, but outside of a ten game hot streak to start the season he's been dreadful. At least his defense has been strong -- he made a nice catch in deep right field tonight. The offseason storyline was that Francoeur would lessen the media load on Wright because of his outgoing personality. Turns out the focus on Wright's strikeouts has dimmed the scrutiny of Francoeur. If it continues much longer, there will be an easy response to David Lennon's April piece "Francoeur to Moneyball Gurus: How Ya Like Me Now?"

Three of the six Nats pitchers who appeared tonight boast a K:BB ratio less than one. That is a terrible ratio. "Closer" of the night, and noted author, Miguel Batista is especially awful, and managed to shut the door despite giving up a home run to Angel Pagan and a single to Alex Cora. Gary Matthews Jr. struck out pinch-hitting in the 7th inning and his batting average is dropping as my BAC is rising. Equally useless bench piece Frank Catalanotgonnaworkhereanymore led off the 9th with a groundout and has since been replaced with Chris Carter. It's about time. Carter is no savior but he's done nothing but mash in the minor leagues. He deserves a shot, and should be considered for some starts in right field.

John Maine continued his recent fastball trend, throwing the heater 97 out of 114 times tonight. He was moderately successful, walking four and surrendering back-to-back solo homers to Adam Kennedy and Ryan Zimmerman. The Nats tacked on a crucial third run against an ineffective Pedro Feliciano in the 8th.

Tomorrow's game is at 7:10 on SNY. Jon Niese vs Scott Olsen is the matchup.

Another strong start from a resurgent Maine
But ninth inning rally only delays the pain
I want to be patient with talented Bay
But one single homer? By middle of May? 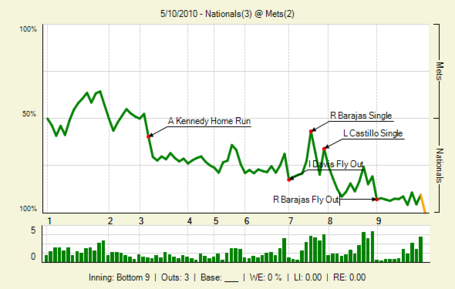