Share All sharing options for: Mets Month in Review: April

Last week, Eric asked me if I was interested in resurrecting an old feature from MetsGeek, the Month in Review. I said no way. Then Eric threatened to withhold my salary. So allow me to introduce you all to the new, improved, and very belated Month in Review! The goal of this exercise is to analyze the previous month's worth of Mets games from any angle accessible. We'll be doing one of these each month for the remainder of the season. Hopefully the remaining installments will arrive in a more timely fashion.

In April, the Mets were pretty successful, far more than I expected when someone—I'm pretty sure it was Sam—picked them to finish last in the NL East. They went 14-9, good enough to end the month atop the NL East. Take a look at this handy-dandy representation of the NL East race over the course of April: 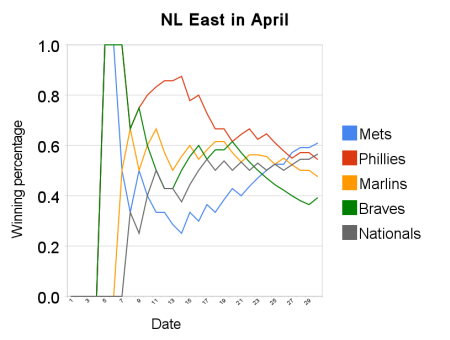 But how good were they really? To answer that question, let's turn to this guy: 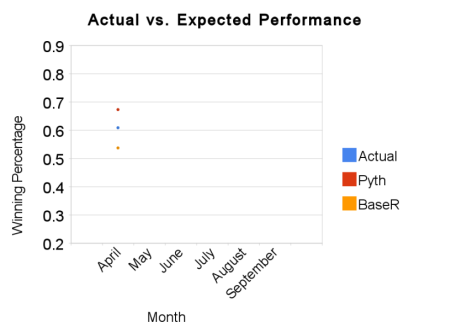 Trust me: that graph will get prettier and prettier as the season progresses.

As you can see, the Mets actually had a Pythagorean record that suggested they had underperformed in April. But, following Matthew Carruth's cue, I decided to estimate the number of runs you'd expect the Mets to score and allow based on BaseRuns. BaseRuns is dependent on how many baserunners a team gets on and the percentage that come around to score. And like Matthew, I found that BaseRuns suggests the Mets have been very lucky in terms of their run prevention; they've walked a staggering number of batters who haven't scored at the rate you'd expect. It's something to be cautious of.

Next, let's take a quick look at who the Mets have played and how they've performed against each opponent:

The "Opp. W%" column represents their opponents' season winning percentage through the end of April (I haven't included any dates since). The Mets beat up on a couple of teams that were really struggling in the Braves and Dodgers while also taking three of four from a so-so Cubs team. A fair showing. Comings, goings, and owies:

Tobi Stoner takes the early lead in the transactions column. Really hoping that lasts, since I never get tired of writing that name. Next up, let's break the position players and offense down a little. We'll start with some basic numbers and move on from there. I've included both April's numbers and 2009's totals, just for comparison's sake:

A quick note: all the defensive data is for the season to date (through May 9). Defensive data is so unreliable in small samples that FanGraphs doesn't even offer it, so I'll be providing full-season data throughout the season. For those who aren't familiar, RZR is Revised Zone Rating, and UZR/150 is Ultimate Zone Rating per 150 games. The Mets actually aren't hitting quite as well as they did last season. Meanwhile the defense has been slightly better, although the sample sizes are minuscule. But all this says a lot about how they've been winning ballgames in 2010: pitching, defense, and luck.

Next, here's a more granular look at each position player the team used in April. I've plotted each player's defensive contributions by UZR against his offensive contributions as per wOBA. One quick note: catchers' "UZR/150" doesn't include any range numbers, just stolen base data per 150 defensive games. Here you go: 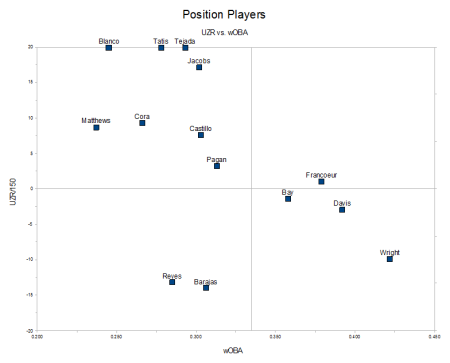 Click to embiggen. The axes are more or less average in each dimension, so the upper right quadrant is where you want to be, and only Jeff Francoeur shows up there and he only barely. Let's move on the starting rotation:

Lucky or unlucky? The Mets' starters have a much lower ERA than xFIP, but their BABIP is on the high side at .320. But it'll be tough to maintain those numbers when you're walking nearly a batter every other inning. The homeruns are also probably not going to stay that low either. Next, here's a graphical comparison of that rotation's ERA and xFIP, pitcher-by-pitcher: 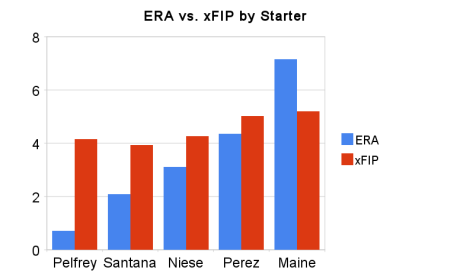 You generally want the red column to be lower, or at least equal in height to the blue. That hasn't been the case for the majority of the Mets' rotation. I think we can safely say Pelfrey's regression is expected. And here's one more, this one a start-by-start comparison of each starter's game scores, just so you can get a feel for how each guy's month went: 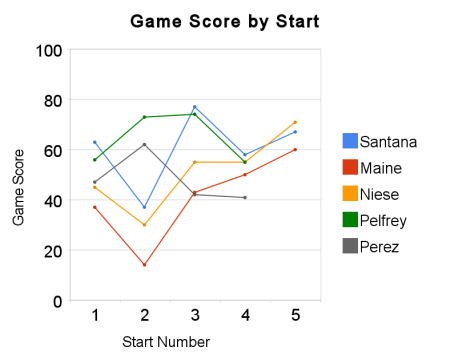 Finally, we're going to take a quick look at the bullpen as a whole and across individuals.

That's a lot of walks, ladies and gentlemen. I'd call that ERA generally unsustainable, but with a walk rate that high, it's inconceivable to imagine it staying anywhere near that low. Something will have to budge. 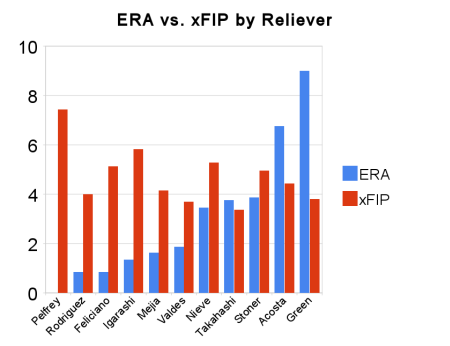 We're going to end this here, but if anyone has any ideas for future installments, post them below.